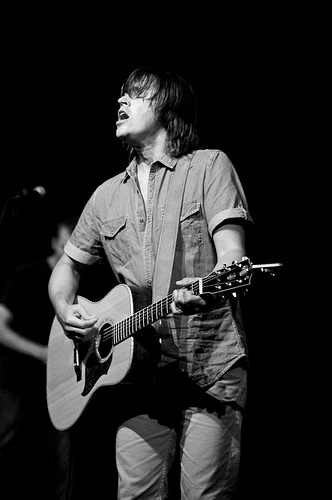 Whether he's taking the stage alone or with the rest of his band, the Old 97's, one thing is for certain: Rhett Miller knows how to put on a show. We had an incredible time when he last came through town and stopped at the Triple Door, sharing the night with Dan Mangan and plowing through his opening songs in a way we'll never forget: some sound issues cropped up about a verse into his first song, "This Is What I Do," leaving him to belt out the whole song (and the one following) acapella while soundfolks furiously scrambled to fix his connections during the performance. I'm gonna sing this song forever about a girl that I once knew / And how she is always leaving, this is what I do / This is what I do for a living, this is what I do he howled, never missing a beat — in the face of what might have been a nightmarish start to his set, he instead generated an energy that was positively un-fuck-with-able. SWOON. We can still hear the cheers and thunderous applause! And before that, of course, there was the show where a good portion of the imaginary staff turned Rhett-O-Sexual, spending a night down at the Showbox with all of the Old 97's that included a private soundcheck, a sweaty, serial-lady-killer set of excellent music (with an extra button undone, 'natch), and more fun than we'd ever dreamed we could have had out together at a show.

So, suffice it to say, we loves us some Rhett Miller! And hopefuly you've already sold on all the do that Rhett does, but just in case you're not, we want you to come and see what all the fuss is about firsthand — on us! Yep, we've got a pair of tickets to give away to Rhett Miller's solo show at the Crocodile this Friday. Just send an email to tig {at} threeimaginarygirls {dot} com with the subject line "ThisIsWhatIDo" sometime between now and 10a on Thursday, June 21st. We'll choose a winner on Thursday morning and notify you by email that you're on the guest list for Friday night's show. Simple as that! Good luck!

{8p / 21+ / The Spring Standards open. Tickets are $18 adv. and can be purchased here. Photo of Rhett Miller at the Triple Door by Victoria VanBruinisse.}