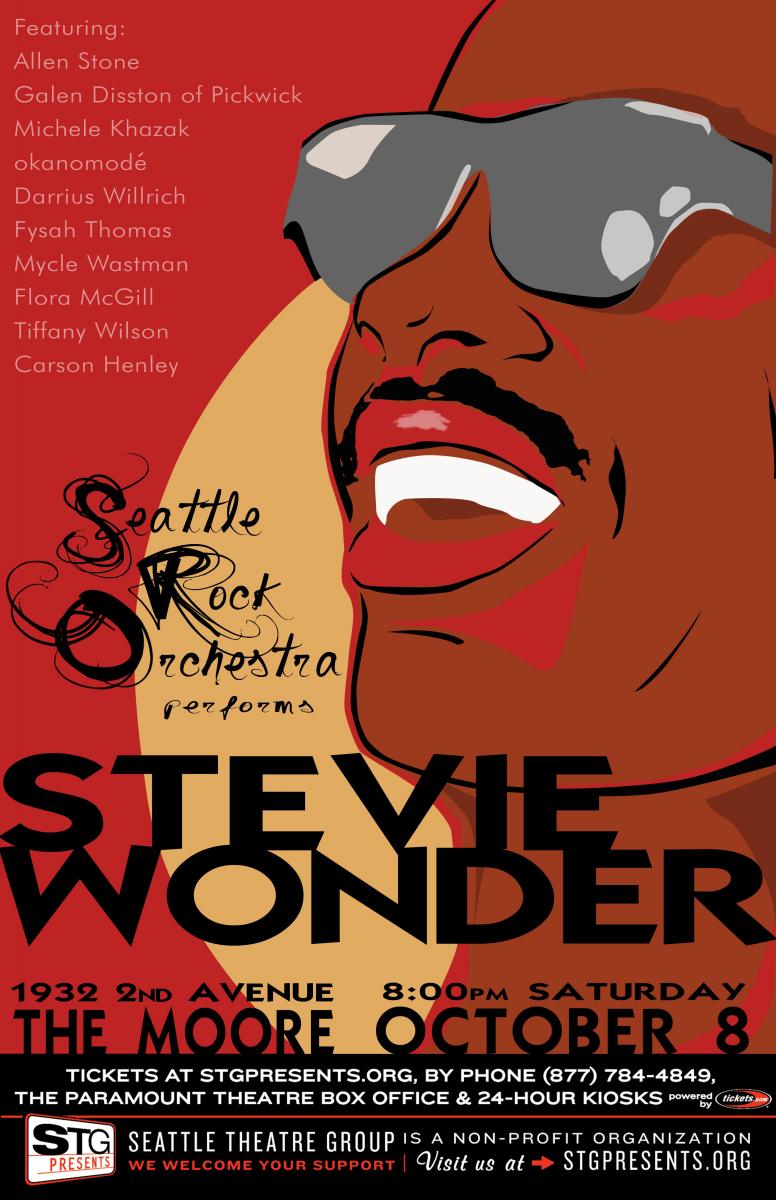 Okay, seriously — how can we even consider not going to this? The poster alone makes us downright giddy!!

The Seattle Rock Orchestra has killed it time and time again, with truly cinematic renditions of the work of award-winning artists, and this Saturday's show will be no exception. They'll be taking on the stylings of the one and only Stevie Wonder at the Moore, with a little help from Allen Stone, Galen from Pickwick, and a whole host of other folks — and there's not a doubt in our mind that they're going to do Mr. Wonder's work absolute justice {and then some}.

Here's a blurb about the evening's logistics:

First, Seattle Rock Orchestra (SRO) will explore the best of early Stevie Wonder, ages 11 -21, as he emerged into the recording artist scene for Motown Records. Wonder’s early songs rife with themes of young love and heartbreak, and imbued with the classic Motown sound made popular by label-mates, Diana Ross, the Supremes, Jackson 5, and Marvin Gaye. Featured songs include, “Uptight (Everything’s Alright),” “Signed, Sealed, Delivered, I’m Yours,” “For Once In My Life,” and “I Was Made To Love Her.”

Then, SRO will draw from acclaimed albums, Talking Book, Innervisions, and Songs in the Key of Life. Wonder’s music from this era became increasingly inventive; he experimented with synthesizer sounds, expressed more personal thoughts on social issues, exposed his unique spirituality and spread a message of universal love. Featured songs include “Superstition,” “Sir Duke,” “You are the Sunshine of My Life,” “I Wish,” and more.

Sounds like a killer Saturday night to us — and it can be for you, too, because we're giving away a pair of tickets to the show! (Woo!) Just send us an email sometime between now and 5p on Thursday with the subject line "WayOuttaSight" and tell us why we should send you and your guest! As usual, the love note's gotta get delivered to tig {at} threeimaginarygirls {dot} com. If you're not the wait-and-see type (and who can blame you?), just pop on over to the Moore's website and pick yourself up some tickets.