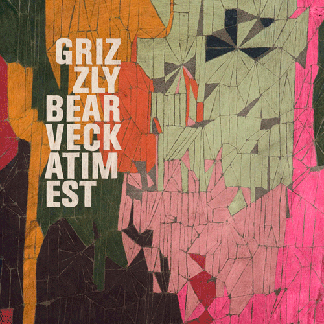 So…Grizzly Bear…Are you going?  You bet your ass I am!  Count this as one of my most highly recommended shows this fall. I have been waiting for months for this Friday’s show and am quite literally bouncing in my seat in anticipation. I’ve seen Grizzly Bear play live several times and each show has been nothing short of staggering. Each and every band member is so full of talent and heart, and every show I’ve seen has contained one or more jaw-dropping elements in which I couldn’t believe what I was hearing.

I wonder, are Grizzly Bear just a bunch of singularly spectacular musicians who happened to find each other, or are they all so good together as an ensemble?  I’m tempted to believe the former, as each members solo work has been immensely successful as well. Either way, the music community is profoundly lucky that Grizzly Bear are together to make such beautiful, detailed compositions.

This tour is in support of the new album, Veckatimest. It contains heart-wrenching multi-part harmonies and a genuinely unreal approach to orchestration. I liken Grizzly Bear to modern day doo-wop mixed with a bit of torch thrown in for good measure. The vocal stylings are arresting, whether a song is being sung by Ed Drost, Dan Rossen or Chris Taylor. Their music is vastly different to anything else being produced these days, yet is still so very accessible and appealing. Quality-wise, they’re on top both recorded and live. If you have a chance to make it out to Friday’s show, don’t hesitate. You won’t be disappointed!