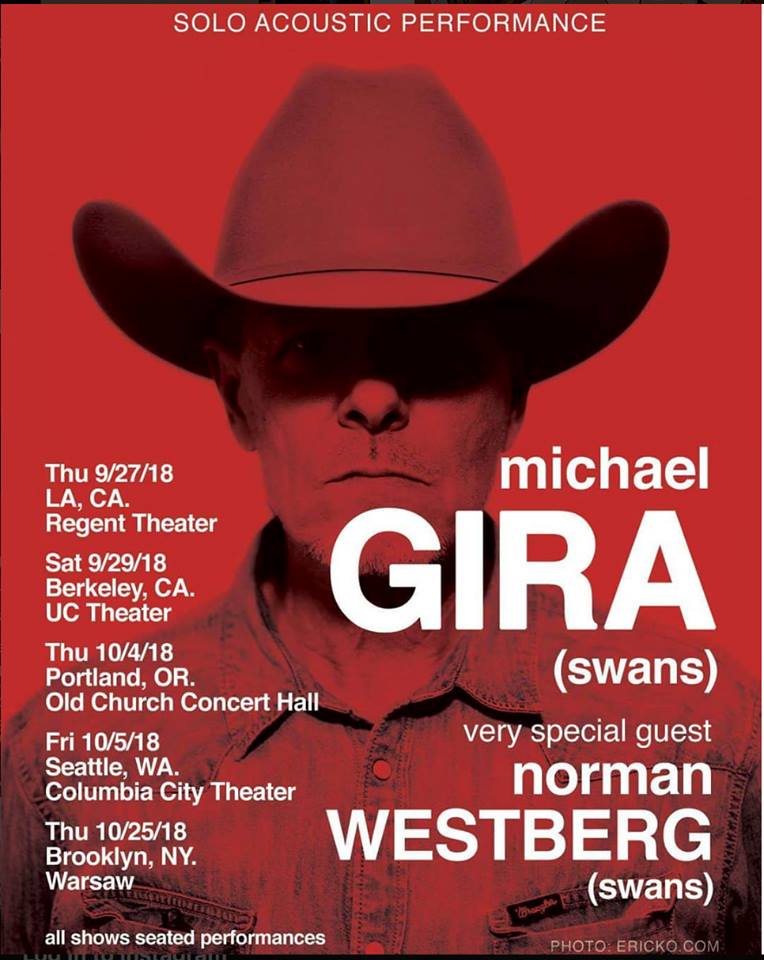 A new chapter is dawning for Michael Gira, the lead-singer and songwriter of the Swans. Since they reformed in 2010, the Swans have released four albums, the last three of which have been sprawling double CD/triple LP releases with multiple 20+ minute tracks. The last time that the band played in Seattle in August 2017 at The Neptune Theatre, they performed just four songs and I think that the concert was three hours long. Personally, I was getting rather bored of this format and was relieved to hear that Gira was going to maneuver the band in another direction. As earlier announced, he has already written the material for the next release, which is due to be recorded in the new year. Luckily, it sounds like the next album will move away from the extended compositions and be more song oriented. To this end, Gira is about to embark on a west coast tour where he will be previewing the new tracks in an intimate acoustic setting. As a additional and pleasant bonus, Swans guitarist, Norman Westberg, will be opening the show for Gira.

Of the twelve song titles that have been reported by Gira to be recorded next year, two brilliant Swans classics are currently planned to be re-recorded: “God Damn the Sun” from The Burning World (1989) and “Amnesia” from Love of Life (1992). It’s both intriguing and a little odd to see that these tracks are going to be reprised. The original versions of both are already flawless, so it seems dangerous to attempt to redo perfection. However, Gira is certainly capable of adding new elements or introducing something new to these timeless compositions that he original released decades ago, so perhaps the 2018 versions will compliment the originals and not be an attempt to replace them.

Other new songs include curious titles such as “Cathedrals of Heaven,” “Sun Fucker” and “My Phantom Limb.” Whatever is in store for the Swans in 2019, this show is your chance to hear some of the new songs and get a preview of the direction that Michael Gira is headed. I am guessing that he is veering back towards a song-based record that might fall somewhere in between The Angels of Light and the Swans reformation records. Between 1987 and 1995, the Swans released impeccable record after impeccable record. A new release that is song-oriented will certainly be a refreshing change and has the potential of matching their best albums that were issued during that era.

Gira will be in Seattle on Friday, 5th October and is performing at The Columbia City Theater. At the time of writing, this show is nearly sold-out. We recommend purchasing a ticket now and taking advantage of this opportunity to see this artist in a stripped down format where the bare strength of his songs will be on display.

Tickets and concert information is here.