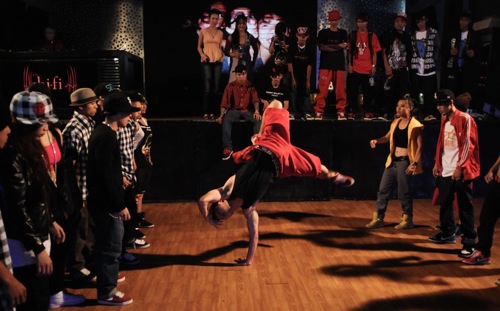 {Saigon Electric screens again at SIFF on May 30, 3pm at Pacific Place and on June 1, 6:30pm at the Everett Performing Arts Center}

I was lucky enough to be able to attend the Asian Crossroads Celebration last night (Saturday 5/28), where I got to see Saigon Electric (Saigon Yo!) – which is honestly the most fun I’ve had watching a film in forever. This fast-paced drama is filled with tons of amazingly-shot breakdancing scenes (backed by a pretty sweet hip-hop soundtrack), and really does an excellent job of melding that excitement with a script that works.

The hip-hoppin’ action is built around two story arcs: Mai –  a shy country girl whose just moved to Saigon in hopes of scoring a sought-after spot at a popular dance school with her ribbon dancing skills, and Kim – a tough street teen who hangs with her dance gang “Saigon Fresh”, as they train to beat hoodlums “North Killaz” at the big Samsung-sponsored breakdancing showdown for a spot in an international competition, and band together to teach troubled kids at the local youth center. After becoming close friends, both girls find romance, and have to navitage the complications of new love amongst  other coming-of-age trials.

I know, I know – there are several things that are totally cliche in the above paragraph (not to mention the “oh no! a rich dude bought the youth center is going to TEAR IT DOWN” plot), but somehow it all comes together. I may have gotten myself into trouble when I corned Director Stephane Gauger at the after party and asked about his John Hughes influences (seriously, you guys, Kim & Hai’s romance is straight out of Pretty in Pink!), but hey. It had to be done.

But this film is honestly more than just a mash-up of Honey, Step-Up, and some iconic 80s teen flicks – its focus on youth culture in Vietnam and the rise of hip-hop somehow elevates it to a level WAY beyond any similarly-themed film I’ve seen. Its ridiculously entertaining, and just cute as hell. Not to mention the completely breathtaking dance battles – I nearly cried during the final showdown.

I can’t recommend Saigon Electric highly enough. It’s just a whole ball of fun that I think everyone can appreciate.