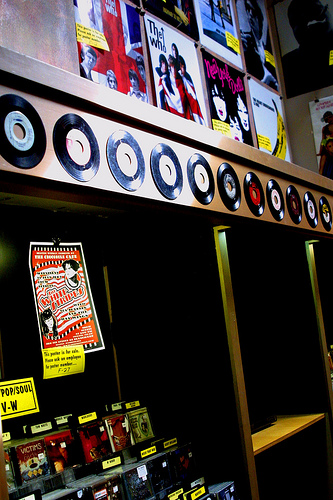 Record Store Day roundup – what did you buy? 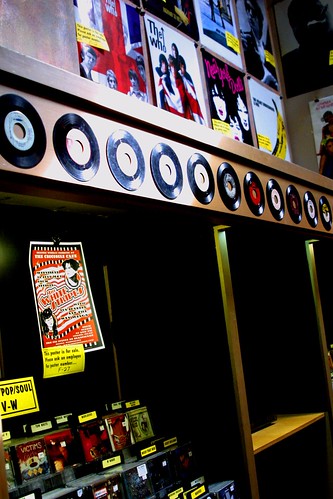 Jeez, I had a great Record Store Day! The sun was shining, and I picked up some great records!

My boyfriend woke up super early on Saturday way too excited to get back to sleep, and wandered over to Easy Street in Lower Queen Anne at around 8:15, and there were already people in line. By the time the store opened at 9, there were about 50 people in line, and he described the scene similar to 20 minutes before the mall closes on Christmas Eve – mass pandemonium of people just grabbing any and all exclusive in sight. By the time he left around 9:30 (after a super friendly clerk helped him find one of the last Thermals exclusives), most of the exclusives were gone. And lucky him – a trip over to the Ballard Sonic Boom provided him with #69 of 95 of the Pavement Live in Cologne hand numbered red vinyl LPs.

By the time I woke up and after we left the Pop Conference (where Sean Nelson used the phrase "This is not a fuck tape") and I got to the Lower Queen Anne Easy Street, the store was crowded and everyone was in a great mood, snatching up tons of new and used releases for 20% off! A nice trip over to the Ballard Sonic Boom found us with a surprise (to me, as I hadn't paid attention to the schedule) in store from Vetiver and plenty more records and shirts that hadn't been available in years. A lovely end to a lovely Record Store Day!

Aztec Camera Knife LP
Matthew Sweet Girlfriend CD
Dressy Bessy Pink Heart, Yellow Moon CD
Fastbacks New Mansions In Sound CD
The Concretes S/T CD
The Boo Radleys Wake Up CD
The Weakerthans Fallow CD
They Might Be Giants Why Does The Sun Shine? CD single
The Lemonheads Car Button Cloth CD
Swirlies What To Do About Them CD
Sukpatch Tie Down That Shiny Wave CD
Josef K Entomology CD
Of Montreal Skeletel Lamping CD
Dutch Elms Music For Happiness CD (first print – hand printed CD and artwork)
The Explorers Club Freedom Wind CD
OG Sonic Boom cap sleeved blue shirt (almost exactly like the one I used to have but without the kids sitting around the record player on the back)
Thermals/Thao and the Get Down Stay Down split 7"
Camera Obscura record store day 7"

What did you buy? Got any record store day photos? Put them in our flickr pool!