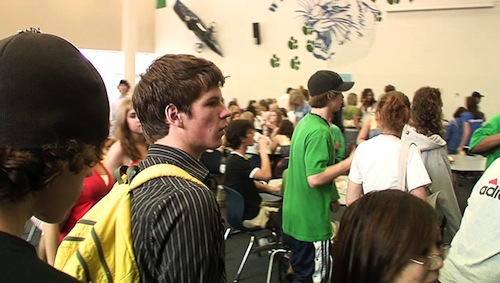 {#ReGeneration opens in Seattle on Friday, 5/4, and is screening at the SIFF Film Center through 5/10}

I gotta give the filmmakers credit for snagging everybody’s favorite 6-pack internet meme good-looking do-gooder, Ryan Gosling, to narrate #ReGeneration. That said, he doesn’t narrate a WHOLE lot of it. And his pretty face is not seen on screen.

What we do see on screen is a whole bunch of teenagers talking about how growing up in an age with constant media bombardment makes it so hard for them to pay attention to any real issues that they end up feeling helpless and like they can’t change the world (so why should they care?)—and a whole bunch of adults agreeing that today’s youth sucks at getting involved, and that their generations were so much better at organizing protests, etc. etc.

It’s basically a lot of interviews with people saying the same thing, “Today’s youth are distracted and seemingly disaffected—they are overwhelmed by all the problems in the world and don’t know how to help.” Sure, they throw in a few older people (most notably a growing middle-class family) to balance out the footage of “today’s kids,” but it mostly seems to focus on high school students.

Being part of Generation X means I've heard this all before (Hi Mom and Dad!), except now the generations that came before us can point to even more laziness and inaction due to a huge technology boom that makes leaving the house almost completely unnecessary. But I’m not sure I’m really buying the story that this documentary is selling, about how access to so much news and media is the cause of teenagers being so, well, teenager-y:

1) I don’t really remember a ton of kids being involved with a “cause” when I was a teenager, although I’m sure some in my graduating class were.

2) With so many world problems, how about just picking one for now and making a plan to help with that ONE thing?

3) Wouldn’t the Internet actually be helpful for finding that one thing and what you could do to help? (Please hold your comments on the KONY fiasco, I know – I know. I just mean it could be. If used correctly.)

So is there more this generation can do get involved and enact real change? I’m sure there is, but unfortunately #ReGeneration doesn’t seem to offer a lot of suggestions.

I don’t know. I definitely understand what this film was trying to say. I’m just not sure it succeeded in passing on what the next step would be to keep it from getting worse.