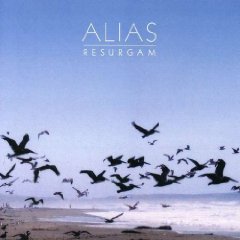 I've always enjoyed Alias' style: tripping beats punctuated with smart percussion taps and a meandering landscape-infused feel that brings the music out of the player and into the world. There are always less words than beats and the music moves progressively, swaying in and out of tracks without song-defining lines. Resurgam is more of the wonderful same, a swinging sound scape both danceable and meditative. His first solo instrumental album in five years, Alias returns to the solid brick foundation of his skill, crafting smoothelectro and acoustic beats so good he doesn't need any lyrics.

Resurgam lifts off with cheerleader chants, spelling "A – L – I – A – S" and breaking it down hard into a soft lulling sweep then whipping right back up into a beat-induced frenzy. "I Heart Drum Machines" is true to style, with melodic falling rain and a symphonic swell only to unfurl into rapid choppy drums and lightly executed dreamy xylophone. This album is full of depth, both hard and soft in texture. Each track starts at one end of the spectrum and then transmogrifies into it's antithesis.

The third track, "Well Water Black", features fellow Anticon labelmate Why? singer Yoni Wolf, giving it the falsetto treatment. The telltale Anticon flavor is there on this album, but Alias makes it all his own with stellar beat-boxing, Casio stylings and a cool unassuming hip hop aesthetic that is much more understated than most of Anticon's offerings.

"M.G. Jack" is completely reminiscent of the awesome Boards of Canada, coming close to ripping off a particular beat sequence they're so fond of using. Alias' version is fuller and more tinny in tone with interlacing percussion patterns with an electric organ (synth?) gracefully anchoring it all down. The whole album is a cavalcade of layered percussion noise, vocal "oohs" and impeccably placed musical static. It all comes together in a neater package than it seems, an electronic instrumental base peppered with glitch pops and laser quick hooks.

Resurgam isn't bombastic or fodder for a dance club remix. It's a dark 80's hip hop influenced rendesvouz with pulsating percussion loops and a shuffling pace. It's not the album to get the party started but it's captivating at times, appropriately cerebral andunabrasive. It could use a fire poker to the ass at times, but in these days of overdone vocal effects and rave-like crescendos, Alias' Resurgam is a welcome respite from that mayhem.