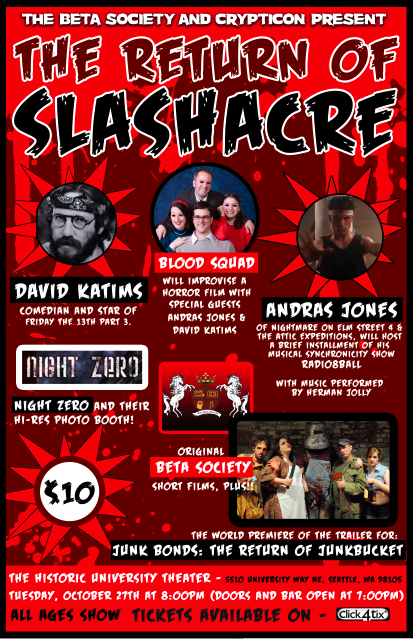 So I pulled up this press release today intending to write about The Return of Slashacre and how awesome I think it’s going to be when I zeroed in on this flier’s photo of Andras Jones and made a HOLYSHIT discovery: I met this guy at a friend’s birthday party last week, totally thinking to myself that he looked really familiar the whole time, and now (inside my head, thankfully) I’m like; “Omgoomgomgomg OMG that guy is Rick, the martial arts boyfriend in Nightmare in Elm Street 4: The Dream Master!!!!” It’s probably a good thing I didn’t realize this while talking to him, or my Elm street fangirl mode would have kicked in and the guy would have thought I was a complete idiot, droning on about Freddy and dream powers and how did you wield those weapons so expertly anyway?* Not that Renny Harlin’s entry in the series is some kind of masterpiece, but it’s still ridiculous enough to be highly entertaining.

But, I digress. The Return of Slashacre, for those who missed Slashacre last year, is a celebration of all things horror and combines live comedy with special guests, film, music – and most importantly, booze. This year’s lineup includes:

* The aforementioned Andras Jones, who will be hosting a brief installment of his Radio8Ball show (with music by Little Pieces)

* The trailer for Junk Bonds: The Return of Junkbucket (The Beta Society’s 2nd feature film! DVDs of the original Junkbucket will be available for purchase also)

Tix are only $10 – get ’em before they’re gone. This is the perfect activity to get you amped up for Halloween weekend!

*It’s worth noting that after said friend reads this, I will likely never be invited to another birthday party again, or actually, any event that Andras will also be at. 🙂