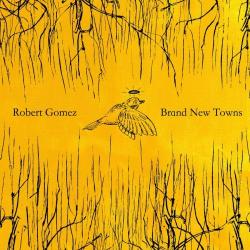 With the release of Robert Gomez's Brand New Towns and other releases from good Denton, TX-based bands such as Midlake, this small town tucked away in the Texan heartland seems poised to fill the ears of America through the underground. Much like Omaha, NE's Saddle Creek, a label that nurtured homegrown acts such as Bright Eyes and Cursive to national, and international acclaim, Denton's Bella Union is taking bands from their backyard and throwing them into the public sphere. And if these bands are as superb as Robert Gomez, I say keep 'em coming.

On Brand New Towns, Gomez brings a slew of Elliot Smith infused quiet epics and classically tinged, waltzy-type ballads similar to his neighbors in Midlake, and very masterfully tucks them all under a blanket of genuine melancholy and emotion. Much like Smith, Gomez’s voice very rarely reaches above a whisper, but the sheer poetics and melody on songs such as "Perfect" would command attention from the most raucous of stadium crowds Horns and strings are used very effectively on this album, understated and meek, creating lush landscapes of sound that let the listener spread out and bask in the music.

Gomez, an accomplished musician having studied Cuban guitar under Nelson Gonzales and performing with Cuban music groups, restricts his abilities which fills his songs with anxiousness, teasing us with the fact that at any second any one of these lullabies could explode into virtuosity. "The Leaving" is a fine example of all of Gomez's qualities blending into one, making this track one of the record’s strongest. A playful guitar interacts with waves of strings and harmonies while Gomez unravels an urgent, hair-raising tale of walking away.

An album this sincere always runs the risk of drenching the listener in unwanted baggage and forced emotion, but Gomez is able to skillfully dodge these pitfalls by giving us everything we want, but keeping it simple enough that we don’t get too much. Brand New Towns will definitely find itself on my top ten list for best albums of this year, and I recommend that we all keep our fingers glued to pulse of Denton TX, because I have a Robert Gomez is just the tip of the iceberg.