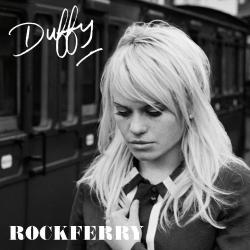 This album is nice.

That’s it, it’s just nice. It is like going on a blind date where there was no connection and being asked about it the next day and you don’t want to be mean so you say “she was really nice.”

There is nothing wrong with Welsh singer/songwriter Aimee Anne Duffy per se. She has a lovely voice and she is really cute and seems like a very sweet girl. I bet she answers her own fan mail and if anyone recognized her on the street she’d happily sign autographs or pose for photos.

Her album, Rockferry has one terrific song: the first single “Mercy.” It has the same neo-Motown sound that became popular again due to a pretty good record (Amy Winehouse’s Back to Black) and a pretty terrible movie (Dreamgirls). It sounds like a huge Aretha Franklin number: her voice is large and commanding, the lyrics are empowering, the music is full and epic and the production is multi-layered.

Even though Rockferry uses a lot of retro sounds, it borrows from too many legendary performers to ever really give you the sense that this is Duffy’s record. “Serious” apes a sultry girl group ballad and in “Delayed Devotion” sings “you have given me a lifetime of security” but no matter how many times you hear the song you want to change “security” to “devotion” because it sounds and feels so much like The Miracles’ “I Second that Emotion.”

I mentioned Winehouse in passing two paragraphs ago and that is the obvious comparison for a lot of critics (and lo and behold, here I am making it, too). That works both the Duffy’s strengths and weaknesses. Winehouse’s Back to Black succeeded because her personality shown through and you could not imagine anyone else singing those songs. Duffy is a stronger and better singer than Winehouse is, surely, but the songs on Rockferry could have been written by anyone. Even when Duffy says that her songs are autobiographical (and she has at least co-writing credits on each track on Rockferry), we don’t really care because these songs aren’t terribly deep and the emotions are universal. That is how pop music has always been and I’ve always accepted (and celebrated) that – as long as the hooks were there.

With Winehouse’s smash “Rehab”, the song was originally a big “fuck you” to people telling her how to live her own life. She might not have always acted like the way a lady is supposed to but she is an adult going to make her own decisions. When every single news story about her was about the drug addict she was descending into, the meaning of that song changed and it became a tragedy about someone sadly living in denial.

Maybe Amy Winehouse isn’t the best comparison for Duffy; Kate Nash is probably more apt. Nash is another young, cute singer/songwriter who stepped out of Lily Allen’s shadow by making some very clever lyrics and awfully catchy songs. I want to like Duffy as much as I like Nash but before she can go from being a pop singer to a pop star, she’ll have to let more of her personality come through on her records. All I’m saying is that there is a difference between good and great and there’s a canyon between talking about someone as being the next Amy Winehouse or Kate Nash or Dusty Springfield or whoever and talking about other ingénues as the next Aimee Anne Duffy.