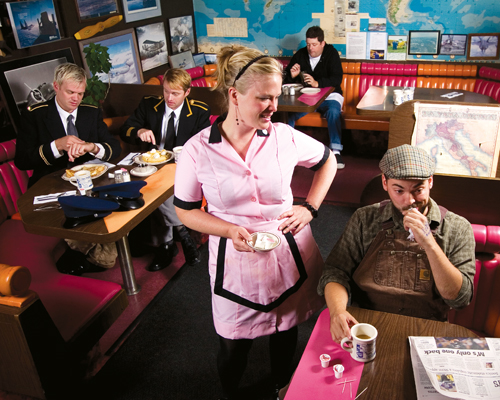 There's no denying that every single member of Tullycraft has a firm place in our hearts.  Their songs encompass all things we love.  They spice up indie-pop with aggressive guitar and swoon-worthy campfire sing along harmonies.  Blips and bleeps are sprinkled through out as are record store clerk culture references and nerd-core punchlines.  Beyond that, the folks that make up the band more than make our heart flutter.

Our ties with Tullycraft go all the way back to 2003, when at our 2nd anniversary Rockstar Suicide Karaoke show a very brave Tullycraft-er took the stage to sing Juice Newton's "Queen of Hearts." Since then, we've been able to cajole Tullycraft into performing at many an imaginary event (YAY!).  It's hard to pick a favorite moment, but we still watch video of their performance at the Magnetic Fields 69 Love Songs show over and over (video sample of the night below). And then there was our 2007 holiday show, the 2004 Shamrock the Vote showcase… well, you get the idea. We can't get enough Tullycraft in our lives.

As of summer 2009, Tullycraft has stepped back from the stage, focusing on other projects (like Corianton and Jenny's sweetheart-pop duo, The Special Places).  But, rumor has it that Tullycraft has been in the studio recording a bunch of new songs, so we can only hope that a Tullycraft record release show will happen sometime before our 20th Anniversary party. I can think of no better way for the band to prep for such a show than our 10th Anniversary Rockstar New Wave Karaoke Bash at Chop Suey {tix}. Can you?!?

Two Tullycrafters — Jenny Mears and Chris Munford — are set to take the stage to knock new wave on it's arse with an amazing rendition of… wait… that part is a surprise. But whatever it is, someone had better post it to youtube asap.

What song do you think they should sing?

PS – Also of very important indie-pop note, Tullycraft donated a very rare song to the 10th anniversary commemorative imaginary zine's mix cd, which you can be the first of your friends to pick up AT THE SHOW!

PPS – There's a part of me that wishes we could sneak the Jenny/Chris rendition of "Empire State of Mind" into the new wave set.  Their one and only karaoke rendition of it a couple years back I think can be categorized as a "Great Moment in Karaoke History."