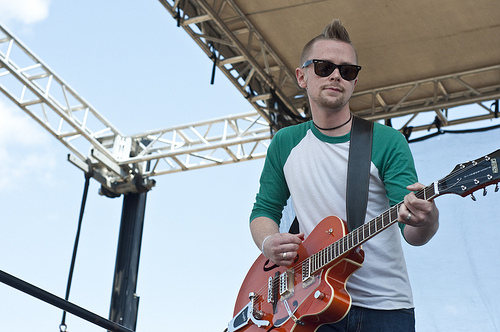 We've loved the Young Evils something fierce since those first strains of Enchanted Chapel made their way onto our iPods and into our headphones back in 2010. Since then, the music they make has proven the perfect soundtrack for those beautiful, sunny Seattle days, the mornings covered with grey when we need a little pick-me-up, and everything in-between. We've emphatically featured the YEs on our best-of-2010 playlists, faithfully recommended show after show, leapt into the air with glee when they agreed to come on the bill for our oh-ten holiday party, shimmied stage left when they played a killer set at the 2011 Sasquatch! Music Festival… the list goes on and on.

So, you can imagine how beside ourselves with happy we were when Cody Hurd agreed to come and spend some time at our 10th Anniversary Rockstar Karaoke New Wave Bash this Friday! He'll be taking the stage at Chop Suey with the likes of Sean Nelson, Lesli Wood, Alicia Amiri, Cristina Bautista, and more all-stars than you can shake a stick at. As is the case with the rest of our performers, there's no divulging which song he's going to serenade us with — but we can tell you that it's going to be completely spectacular and that you won't want to miss it! A duo with Cristina Bautista, perhaps? Or with bandmate and Mal de Mer member Michael Lee? The possibilities are endless!

Tickets are only ten dollars {whoa!} and are going fast, so pick up a few here before the night sells out. Don't forget, the show is 21+ and doors open at 8:30pm!

{Photo of Cody Hurd at Sasquatch! 2011 by Victoria VanBruinisse.}