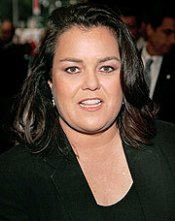 Rosie O'Donnell says she won't uproot her wife and kids from the NYC area to host The Price is Right (which tapes in LA).

"I'm in a weird position. I don't need the money…. So to get my entire family uprooted from their lives and move them across the country so that I can have a fantasy childhood indulgence … it just doesn't seem fair."

O'Donnell lives in Nyack, N.Y., near New York City, with her partner, Kelli, and their four children. She recently left ABC's "The View" after a heated on-air squabble with co-host Elisabeth Hasselbeck.

"You know, if they were able to do it in New York, it would be a different story," O'Donnell said. "But it looks like it's — it ain't gonna happen."

No word on whether she read our live blog of Bob Barker's final ep.