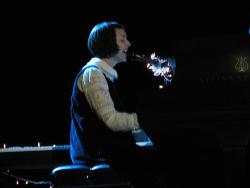 The likeable and funny Rosie Thomas at the Triple Door

A lot of artists have two personalities, and either one is prone to showing up on any given night. Have you ever discussed seeing someone like, say, Ryan Adams (or maybe less controversially, Cat Power) and telling someone (or vice versa) that they were amazing one night –- playing for two hours and his voice sounded incredible and he was funny and down-to-earth — and then have a friend tell you that they had caught a different show and had a completely different opinion? Maybe their voice didn’t sound as strong or played with their back to the crowd or maybe they were just drunk. It just happens with people – especially those with public personas.

For singer-songwriter Rosie Thomas, there are also two personalities at work and both are obvious during her live shows. There’s the sincere, angel-voiced singer who makes songs about love and longing and love and heartbreak. Then there’s the Rosie who is overtly silly and doesn’t take herself even the slightest bit seriously.

Thomas opened her set Thursday night at the Triple Door by appearing as her character Sheila Saputo in Santa Clause attire. With fake teeth, a neck brace, and horrible glasses, Saputo is a meant to be a pathetic spinster-ish old lady with lots of cats, but with Thomas’s likeable personality and good-natured humor, she is sympathetic – but more importantly, really, really funny. Thomas (via Saputo) told the crowd what Christmas means to her, with an acronym for St. Nick (the “K” stood for kitty litter).

The only downside to Saputo’s appearance is that it abbreviated the opening act, Seattle singer-songwriter Jen Wood, to a very-short 20 minute set. In the interest of full disclosure, I must concede that Wood and members of her band have been good friends for several years, so my objectivity on that matter is obviously subject to question.

Everything about the evening though was wonderful. My friend and I were seated in the front row of the Triple Door, the sound was, as is par for the course at this venue, pristine (the Triple Door is seriously the best place to view a live show in Seattle), another friend opened the show and played to almost a full room and Rosie Thomas was incredibly likeable and charming and funny. Have I mentioned yet that Rosie Thomas is really funny? If not, it’s a point I will make over and over again during this review. Really, I couldn’t have asked for anything more.

Even though I’ve admired her delicate voice and songwriting, Thomas found a permanent place in my heart last year when she started the rumor (which was picked up by Pitchfork and much of the music blogosphere ran with it) that she was knocked up by Sufjan Stevens.

If you have never seen Rosie Thomas live, it is jarring the moment she comes on stage. She speaks in a voice that sounds like Minnie Mouse on helium. To paraphrase Art Brut’s Eddie Argos, it is her speaking voice, it’s not irony. Yet, when she starts to sing, her voice is beautiful.

Thursday night, she sang several songs that spanned her catalogue, including several from her latest, These Friends of Mine, (“Kite Song”, with its fragile harmonies and light piano instrumentation was especially lovely) as well as a few holiday staples like “Silent Night” and “Baby, It’s Cold Outside” (which was a duet with her brother Brian, who played piano for several of her songs and made a good straight man to his zany sister by making jokes that she was adopted – and also has a nice baritone voice) and a cover of REM’s “The One I Love” (which she also performed at the 826 Seattle benefit last month).

I think my favorite part of the evening was the bit where Thomas read through the police blotter in the local newspaper from the small community her grandparents live in (I think it was somewhere in Kansas), which included stories of the Dairy Queen being robbed just for a cake and how the most recent Harry Potter books at their local library are now overdue. Or maybe my favorite part was where Thomas recounted her experience as an actress, appearing with Steve Zahn and she read her lines on stage with Jeff Shoop, her guitarist. Or maybe it was the time between the end of her set and the beginning of her encore was the shortest I can recall (basically it was enough time for Thomas and her band mates to walk off stage and run back to their positions. Or maybe it was the emotional harmony on “Much Farther to Go.” Forget it – there really can’t be any one favorite moment, not even the awkward, but cute, way she said “Merry Christmas” before every song during the first half of her set.

Simply put, this was altogether a remarkable and fun show orchestrated by one of the most unique and entertaining artists in the Northwest.