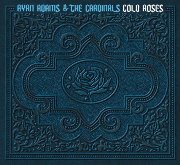 My story is a common one: I loved Ryan Adams when his only records were Heartbreaker and Gold. I loved him in Whiskeytown. I loved the whole alt-country thing. I was an Uncle Tupelo fan, a Wilco fan, a Ryan Adams fan, etc. I bought a telecaster guitar. I wished I were an elderly bluesman on a dilapidated porch in Mississippi. I saw Ryan Adams on the tour after Gold came out and I remember it to be a great show down at the Moore Theater. I remember it snowed sometime during the long, bluesy set, and it was a treacherous drive back to Puyallup.

But then something bad happened — twice.

First Bad Thing:
Love is Hell, (both parts) came out and seemed, well, kind of not-so-good. There were parts that were good, but it was just plain hard to like the songs.

Second Bad Thing:
RocknRoll. Well, I sort of hated it. A lot.

My plea to Ryan was thus:

Why oh why can't you just release one of those acoustic Heartbreaker-type records we always hear about you having stored on a bookshelf somewhere? We know you can make a great record of heart-breaking acoustic Southern rock country stuff, where is it? What am I supposed to do with RocknRoll? What am I supposed to do with the Phil Spector-wannabe reverb on Love is Hell and this crappy cover of an Oasis song?

Well shit. After a while I started to take deeper breaths and forget about Ryan and Wilco. The tour for RocknRoll was supposedly good, Love is Hell had some awesome tracks (especially "Hotel Chelsea Nights, it just took some digging to find) and I just felt like an asshole because I want an artist to keep making more of my favorite "type" of records. That's an asshole thing to want. I stopped listening to alt-country and got really into New Order and The Smiths.

(Heartbreaker is SOOO good though!)

So then I hear that Mr. Prolificacy is going to release three records in 2005. And no, none of them are the fabled "finished-but-not-to-be-released" bookshelf records. (Although someone did leak the Heartbreaker-era record, Destroyer, to the internet, where critics and fans naturally refused to break the law to hear the fantastic songs for which they all had been pining.)

The first of the three (THREE!!) records coming out in 2005 is a double-record called Cold Roses, by not just Ryan, but Ryan Adams and the Cardinals. It's out now, and it's awesome. It grows on you like a bruise on a hemophiliac.

The record begins with "Magnolia Mountain," a song brilliantly country and epic in its story-telling narrative, and one I could not pin down to a "it sounds like this" until I was waiting for Ryan and the Cardinals to take the stage at a concert in Knoxville, TN and heard the Grateful Dead over the house sound system. The guy sitting next to me wondered aloud if the Grateful Dead playing was purposeful, to show Ryan's new direction. Sure. Why not. "Magnolia Mountain" could be a Dead song.

Of the eighteen tracks on Cold Roses (19, if you have the double-LP vinyl), only one song really stands out. Lucky enough, it stands out because it's sort of bad. I mean, what do you expect from a song called "Beautiful Sorta." Only the Clash would be able to pull off that title. The track sounds like b-side off RocknRoll, and it's inclusion on Cold Roses is "baffling sorta."

But aside from that one track, the rest of the record is full of country and blues twang, similar to that of the Jayhawks on their Rainy Day Music. And some of the tracks, like "Meadowlake Street," "Let it Ride" and "How do you Keep Love Alive" may be some of Adams' best songs.

Cold Roses isn't another Heartbreaker, there are way too many instruments for that. But it's older, it's more mature, it's a great songwriter backed by a band of hand-picked session musicians that all sound like they live and breath Nashville recording studio dust.

All in all, Cold Roses is just really good, and that's only compounded by the fact that it's a Ryan Adams record, and with the eighteen or nineteen songs being released here, it only becomes clearer that Adams is a magnificently talented songwriter at just the age of 27. Cold Roses is an intimation of more good stuff to come (two more records this year!).