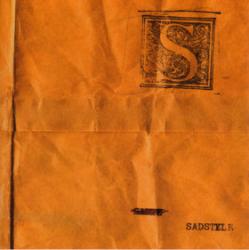 The diaspora of talented songwriters from the collective known as Carissa’s Wierd has by now become legendary, with a few albums of post-break-up works from Sera Cahoone (solo) and Mat Brooke (Band of Horses, now Grand Archives) to remind fans of their three very fine, first full-lengths while all together: Ugly but Honest (2000), You Should Be At Home Here (2001), and the absolute classic Songs About Leaving (2002, recorded and mixed by Chris Walla).

Co-leader Jenn Ghetto has kept a lower profile since helping to craft and contributing inspirational vocals and guitar to those dark day dream discs, but her band S is currently touring with Grand Archives, playing the Southwestern states as I write this. For the journey flagship Seattle label Aviation Records did a high quality re-release of her personal 1999 debut sadstyle, which Ghetto is able to sell whilst on tour. This connection occurred, according to Hannah Levin at the Seattle Weekly, when guitarist and keyboardist Joe Arnone from Aviation’s band See Me River began helping Ghetto revive S.

The label responsible for bands like the punk-bluesy SMR and psychedelic warriors The Weirdlords has had Ghetto perfect the original mix and Chris Hanzsek re-master all of the songs, bringing out the best in this timeless basement-apartment song-cycle. Listening to it now reminds me of the more openly angry and sorrowful indie rock that once was, before it necrotized into a genre. sadstyle is the record that answers its own question, “Who Haunts You?” by haunting the hell out of you.

The reissue has several additional new songs than the dense twelve-track version put out ten years ago, and at least one them makes this reissue an essential Pacific NW rock purchase, “So You Wanna Be A Rock Star.” This devastatingly dour anti-anthem is within the first half dozen that start the album, with Ghetto’s desperate, sobering vocals and puissant guitar playing pretty much knocking the wind out of the listener before the next half of the record begins. The cushion of ambient noise and keyboard work helps stretch out the mood, not necessarily lighten it.

Just as it was once written, hope deferred sucks the life out of you, and naked breakdowns like “The Waltz” really seem like Ghetto is finally choosing to emotionally unload. But unlike the barking dynamics of early emocore (with which she shares her rage and soul sickness), this is all done relationally, as a fairly quiet but extremely intense dialogue with whoever she’s singing about/to.

Sadstyle edges self-pity and seems caustically defensive, but there’s a lot of assholes out there, and it sounds like Ghetto spent some time getting banged around by a few. Thus, there is an empowering sense of “ugly but honest” freedom within the swirl of her strumming (as tight as her vocals seem spontaneous), and the challenge to enter her room and face the pain we cause others. Creating empathy isn’t always the primary motive of great music, but it sure feels pretty astonishing after a decade of listening to an almost Stalinist indie pop scrubbing away of social realism.