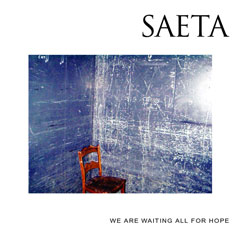 We Are All Waiting for Hope

The construction of minimalism is a tricky task. Too little space filled, and then you lose the listener's attention. Too much and you crowd out the mood. Seattle band Saeta have a gifted understanding of the chemistry needed to pull this approach off correctly, as demonstrated on their fourth release, We Are Waiting All For Hope.

Floating somewhere between like-minded minimalists Low and the sparser moments of Crooked Fingers, Saeta take you on a journey through the moments of lost love, the memory of being held tightly, and the dried up flowers that are all you have left to remind you of that time. "Remember the time. Remember the space. Remember the dreams that hold us," frontman Matt Menovick urges us in the opening track "Can You Forgive the One that Hurt You". With the images it provokes, you can almost be a witness to the plea between two lovers as they try to reconcile the life between them.

The structure of their songs has a quality of antiquity with the bare naked quality of the insrumentation. Like a creaking chair, they ease from Menovick's raspy voice into the featherlite strumming of acoustic guitar, which is gently swallowed by the sound of a cello and keys and then an exchange of singing is made to Lesli Wood's jazzier, throatier vocals. A very powerful transition, indeed. They have an uncanny ability to write songs in a way that allows the story to take precedent, as if the music is only there to remind you of the song, in the same way a breeze reminds you of the air around you.

However, I can't say that Wood's and Menovick's vocals always work to compliment each other. In Low, the voices of Mimi Parker and Alan Sparhawk work together beautifully. Menvovick's and Woods singing style are dramatically different from one another, and while gorgeous alone, together they create a dissonance that takes away from the music. The only other issue that I had with We Are Waiting All For Hope was the quality of the production. Frankly, I expected something a little more grand coming from Steve Albini — not that there needed to be more instrumentation. But from a recording standpoint, the lack of both depth in the sounds as well as diversity of songs approaches made me wonder what exactly Mr. Albini did besides stick up a mic and hit record. I would have liked to hear different colors used on the vocals, and more room variation on the piano sounds, or something else to change the character from song to song. His lack of inventiveness was the weakest element on the record.

With We Are Waiting All For Hope, Saeta has created a nice collection of introspective, melancholic minimalism. They have grown very well into their niche and have produced a quality and chemistry that seems second nature to them. Unfortunately, this quality was not highlighted by the presence of Mr. Albini and so the record just falls short of its potential.