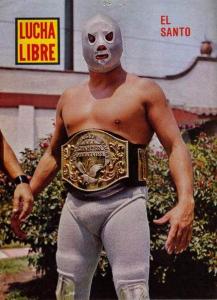 "Santo" by Southern Culture on the Skids

Who doesn't like Mexican wrestling? Really, honestly, who doesn't? I mean, what is there not to like? It has masks, superheroes, action, Aztec Mummies, the whole nine yards. And no one was as big of a star of Mexican Wrestling than Santo, El Enmascarado de Plata (not to be confused with Ron Santo, former Cubbie infielder). The man was a legend in Mexico, not only as a wrestler (or as they are known in Mexico, luchador), but as an actor and entertainer – all with his silver mask. In fact, Santo was buried wearing his silver mask. He ended up starring in 52 films before he died and his influence lives on in things like one of my favorite Angel episodes, The Cautionary Tale of Numero Cinco, where five brothers – who happen to be Mexican wrestler by day – fight demons by night.

And who better to immortalize Santo musically than Southern Culture on the Skids? The song is a brilliant little spanish rock piece, like Richie Havens meets the Cramps. They do an excellent job summarizing the life and legend of Santo, with magnificent horns and guitars. It is fitting tribute for such a mystical figure – right down to the howled "Viva del Santo!" Sure, it might (well, is) the only Southern Culture on the Skids song I have on my iPod, but really, when it is something as satisfying as "Santo," who needs anything else?