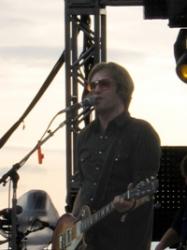 Atmosphere is Everything: A Sasquatch 2007 Manifesto

Having grown up within throwing distance of the Gorge, I have always felt a sort of familial connection with the venue. I have walked the streets of George and Quincy in November, when the amphitheatre is silent and the campground only echoes the Dionysian decadence of the summer months. I guess you could say I’m a little protective.

The Sasquatch festival is permanently etched in red ink on my calendar every year. The combination of having the music I love played in a place that I grew up holding sacred is bigger than Christmas for me. Seeing the bright colors of the Flaming Lips’ live show splayed on the mammoth, glacier-cut rocks or witnessing Death Cab for Cutie destroy their equipment at the climax of “Prove My Hypothesis” at sunset are memories that are engraved forever in my mind. Moments like those are why I love music.

And I believed that this year would be no different. With arguably the biggest and best Sasquatch roster ever, I truly felt that this year could possibly surpass anything I had ever seen in the Columbia valley, even better than the hydroplane races I grew up watching in the Tri Cities.

But, I was wrong. Not only was I wrong, but the Sasquatch festival and the Gorge in general might be tarnished for many years to come, well, to me at least.

The first indicators that this year’s Sasquatch was going to be different than years past began before I even stepped a foot through the gate. The line was much longer and more unruly than ever before, which caused me to miss the Saturday Knights, a group who I had purposely avoided seeing in Seattle, just so I could see them for the first time on the Gorge main stage.

The demographics of the line were also different. In years past, even in years when the Gorge was more sweltering than it was this year, the line was made up predominantly of spectacled, blazer wearing music geeks who passionately discussed the events that were to unfold. It used to be a small club that had its huge region-wide meeting and celebration once a year in the number one potato growing county in the nation. However, while small islands of that group were still gathered in the line, they were undoubtedly overwhelmed by shirtless, backward-capped gorillamen, who instead of debating the influences of Grizzly Bear or speaking of their anticipation to see a rare U.S. Manu Chao performance, grunted in monosyllables about how much they had drank last night, how much they were going to drink today, or about how bangin’ all the bikini-clad college girls were.

My suspicions of a possible Sasquatch degeneration proved correct once I got in the gate. It was like every fraternity house in the Western states had exploded into the mighty Columbia and washed up in drunk, misogynistic chunks on the shores of the Gorge. At a little after one in the afternoon, one would be hard pressed to find a hand that wasn’t firmly cemented to a tallboy of $10 Coors.

Don’t get me wrong; I’m no tightly corseted Puritan in any sense. I had few of the ten-buck brews myself, but when it came down to it, I was there for the music. However, it was quite evident that 90% of the attendees weren’t.

Case in point. I was extremely excited when I saw a few days before the festival that the Long Winters had been added to the bill. I remembered the fantastic show they put on at the Gorge a few years back, and licked my lips in anticipation to see what John Roderick and Co. would have in store this year. I was confused when I walked down to the floor level and basically made my way almost to the stage unimpeded. Where was the frenzy of people? Why wasn’t anyone singing along? I was dumbfounded by the apathy. The floor level, the level where the die-hards risk being kicked, pushed, and jumped on to see their favorite bands up close and personal, was as energetic as a Lutheran liturgy. People stood around talking amongst themselves and sending text messages on their phones. The scene could have easily been mistaken for after school at the mall food court. Didn’t they realize the greatness that they were witnessing? Here is a snippet of a conversation I heard while trying to enjoy the performance:

But it thankfully wasn’t all like this. Pockets of true fans still flocked to see bands on the smaller stages. The Aqueduct performance was superb, and the living room-sized crowd was energetic and knew what they were getting. And David Terry fed off this energy, and gave everyone the manbear-meets-piano performance that we’ve all came to expect. The same could be said about Grizzly Bear and Gabriel Teodros, who both gave polished and energetic shows to their loyal fan base in attendance.

Manu Chao also put on a great performance and was definitely the strongest of the day. You could see the showmanship that he has gained from years and years of touring every nook of the world. He could have easily played the Roman Coliseum, and wouldn’t have seemed dwarfed at all by the grandeur of the venue. Everybody – from the hipsters, to the drunken frat boys – leapt, yelled, and howled with him – even though most people couldn’t understand a word that came from his mouth.

But this camaraderie between the different factions of Sasquatch goers was short lived. By the time the sun had gone down and the Arcade Fire was preparing to come on stage, the day had taken a turn for the messy. We have all been to parties where one guy, who has been boasting all evening about how much he can drink, ends up vomiting recklessly and uncontrollably. Now imagine that this one guy has multiplied by a couple hundred, and you can get an idea of what the scene was by the time that the Arcade Fire had fired up the light show and started belting out “Black Mirror.” I saw all of the tried-and-true types of vomiting, all at basically the same time. The walk-and-puke. The calling-dinosaurs puke. The I’m-not-puking-I’m-just-spitting puke. I saw it all. It was hard to keep my eyes on the grand and emotional performance by the Arcade Fire while I was fearing that at any moment we all might be swept into the valley by a river of yark.

The day took a pleasant turn, however, during the long break between the Arcade Fire and Bjork. Everybody who said “fuck water” all day and had filled their body with nothing but barley and hops, were done. They had destroyed themselves. After the climax of team vomiting had ceased, the gorillamen slowly crawled out the front gates to their cars, tents, wherever. I’m sure that most of them couldn’t even pronounce Bjork, let alone did they care for her music. So as our favorite Icelander took the stage to put on a great show, we the few, the proud, the dedicated got the lay back and enjoy our victory – the victory of music. You just had to be careful not to put your hand in a puddle of puke.