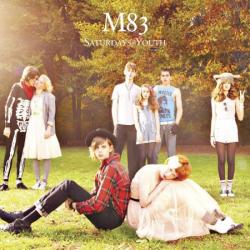 Oh the French. The French music revolution has crept into our landscapes, filling our void with new and interesting sounds. There are rocking French bands like Phoenix and then there are the M83s of the French music scene — the kind of music that back in the day would have been labeled as "new age" (or embraced as really badass soundtrack music) and probably would have been sold in Nature Company stores right next to the "Sounds of Nature" CDs and the amethyst crystals and the sticky stars I put on my ceiling as a kid.
There are some "New Age" bands out there of the PBS persuasion (John Tesh, I own all your albums) but then there are bands that transcend that tacky namesake for a higher calling … and what better higher calling than listening to a band named after a galaxy?

M83 proves time and again that the shoegazer genre is not going anywhere. The new M83 album, Saturdays = Youth, is not just ambient. Sure, it's got the usual M83 sound (the speaking over electronic music is a staple of M83 and in this album, it has not lost its usual intensity) and even its opening song, "You, Appearing," starts just like "Moon Child" from M83's 2005 album Before the Dawn Heals Us with the soft tapping of a piano. But this album has a more structured, nostalgic air about it. If anything, this is M83's trip down memory lane. This is M83's ode to the 1980s.

In fact, you can't escape the 80s here, but why would you want to? M83 head honcho Anthony Gonzalez vividly captures the decade in every track as if it really were 1986 and we're all taking that highway to the danger zone. I want to make mix tapes of this album for people.

The standout track of Saturdays = Youth is its first single, the decadent party track "Couleurs." This track, if played loud enough, may inspire you to bust out your robot (unless people are looking). It's a full-sounding song, livened by synchronizers and it's a real techno romp.

I have always thought of M83 as great background music (that is a compliment). But with Saturdays = Youth, M83's background isn't just around your headphones or behind your couch, it's two decades behind you.