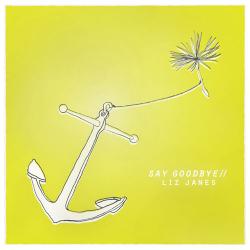 It’s kind of neat to alternate listening to Liz Janes’ long-awaited third album Say Goodbye with Asthmatic Kitty label-mate (and producer of her 2002 debut Done Gone Fire) Sufjan Stevens’ recent work. Janes creates adorable miniatures from very precise keys and guitars beneath patiently earnest and perfectly elegant soulful vocals. Her voice was useful to begin with, but has gotten superb since her previous solo album Poison & Snakes (2004) and her self-titled 2005 collaboration with free-form experimenters Create (!). The time she’s spent touring with Stevens, and actually performing alongside outsider-folk-punk god Jandek (among other projects) has led her back to an extremely controlled, incredibly inspired, but mostly soft-sounding eleven track song cycle.

If it’s so well made on its own, why bother comparing it to her musical brother’s work at all then? Because, save for several sublime acoustic tracks on his pre-full length (but fully full-length!) teaser EP All Delighted People, Janes’ presentation is all stripped down and flows like slow-motion modern dance. Whereas on the exploding-globe-and-kitchen-sink ADP opening (title) track Stevens samples an operatic moan from (I’m guessing) Terry Scott Taylor’s chamber pop hymnals, a deep expired ear-worm pop song-immortalized chorus from Simon & Garfunkle singing an image of apocalypse, and a Tape From California-era Phil Ochsian Guernica-size canvas of Noosphere-soul music, Janes’ plops herself down on a cozy orange bean bag in a 70s rec room and delicately crafts songs for a non-existent Joan Baez gospel album. Or a less genre-chopping Galt MacDermot score/Original Soundtrack. Or something from the proto-freak folk scene of the UK, adding a little natural North British soul.

Both Janes and Stevens are deeply referencing miscegenated topical pop from an evolving era of social change and boisterous rock opera aspirations. It’s just Stevens combines Jesus Christ Superstar soar with R. Stevie Moore-rooted “outrageous brain spewage” (thanks, Trouser Press) on his game-unpacking-and-reprogramming-then-bootlegging-for-future-generations Age of Adz, whilst Janes is content to gently but tenderly kiss us with spare but cold tracks like the mesmerizing “I Don’t Believe” and “Who Will Take Care” on Say Goodbye. Thus, it’s been easier for me to fall into the latter work, as much as I admire and celebrate the former.

I don’t know if Janes took voice lessons since the middle of this past decade, but her vocals are some of the best you’ll hear on any album this year; truly exquisite stuff. (This is not to say they were deficient before; on the contrary, they’re just far more fetching than most you’ll hear on any current indie rock album, and far less narcissistically flashy than what you’ll find in the soul charts.) The opening, bass-led “I Don’t Believe” is the only real soul (genre) song here, and it’s an obvious homage to gospel-tinged mid-late 60s ballads; for giddy fans (like me) of the recent wild-C&W Thee Emergency release (Cracka Slang), this track will inspire alternating with that album. Musically, almost everything else on Say Goodbye is minimalist, save for the more-band approach to “Who Will Take Care” (a cream in your coffee kind of urban ballad, cue the back up harmonies).

Lyrically, throughout it seems that Janes is caught between accepting and struggling with both the spiritual and the material world. Though admitting uncertainty of fate and unafraid to admit awkwardness in even existing, there are certainly no Curse Your Branches fits of temper or resignation here, but a desperate plea to find place in space and reality. She urges us to realize our own stations as “creatures,” that is, “the created,” but also that sanity is found in time and space. That she finds sanity in those things, which often (supposedly) drive other artists mad, is telling in itself. That closer, “Time & Space,” is the closest to an out-and-out praise song, and could easily have been written by Judee Sill, staring up at her poster of a UFO before meditating or studying some apocrypha.

Whispers of other cosmic ladies on various spiritual levels creep throughout Say Goodbye, from Vashti Bunyon to Joanna Newsom, but seriously you’re not going to hear a direct connection to anyone else but the veteran actually making the music herself. This helps to make Say Goodbye the wholly sure, certain, and singular-voiced declaration of existence and creation that it is. Perfect for chilling out, study and reflection, or watching the given day fade to dusk outside.