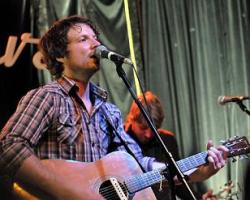 Sea Wolf at the High Dive

I was all geared up to go see Sea Wolf on Saturday night, when my date cancelled last minute. Everyone I called already had plans so I had to wrestle with my loathing for Fremont on the weekend and my love for Sea Wolf. In the end, Sea Wolf won out so I steeled myself for a solo night out at the High Dive on <shrieeeeek!> Grad Night!

When I arrived at High Dive, my expecations were met. The bar was packed to the gills with a bunch of people who couldn't get into the already filled-to-capacity Ballroom. Thankfully, Sea Wolf was just about to go on, so I thought I wouldn't have long to wait. Unfortunately, the band's sound check went on for quite some time and they had a lot of trouble getting their equipment to the right levels. Overheard while waiting for the set to start: "Do we even know who this band is? I think we've got one of their songs on the computer. Well whatever, this better not suck. Who farted?"

Honestly though, once the set started I could have cared less about anyone around me. I saw Sea Wolf open for Nada Surf a few months back and they got kind of lost in the largeness of the Showbox (bonus quasi-celebrity sighting: dreadlock boy from Nada Surf was in attendance at the High Dive). Their sound is much better suited for a small venue and they all seemed a lot more comfortable.

Despite a set plagued with technical difficulties (mostly the keyboard kept going out) and a lot of crunchy feedback, they pulled off a really great show. For as many people as were up on that little stage, Alex Church really was at the center of it all, his plaintive vocals just filled up the tiny space. All the other band members seemed to be in a really good mood and enjoyed themselves quite a bit, which made for an enjoyable show for the rest of us. Although pockets of the crowd seemed pretty restless; there was a lot of pushing, beer spilling and making out going on around me. Still the band either didn't notice or didn't care and played the hell out of their set. I wasn't disappointed in any way.

Since their catalogue is still relatively small, we were treated to pretty much everything Sea Wolf has recorded to date (yay!). The set started out with a few songs from Leaves in the River, the late 2007 full-length, including "The Cold, The Dark & The Silence" and "Middle Distance Runner," both favorites of mine. They continued with two songs from their 2007 EP mid-set and then resumed Leaves in the River, including the highly marketable "Rose Captain," followed by the absolute sea shanty "Song for the Dead."

When I say highly marketable, I mean it occurred to me that very soon I expect to hear Sea Wolf used in a car commercial or to sell jeans or whatever. And I don't mean that the music lacks integrity, far from it; it's just that it's got that particular kind of sound that the marketing geeks at Volkswagen know will sell. I love their deep and somewhat haunting nautical sound and the incorporation of the rich-sounding cello on most songs just makes me swoon.

"Winter Window" got me thinking too, during the lyric "…this is the world we live in – it's not the one I choose, but it's the one we're given…" that it was sort of reflective of that night; it wasn't the audience or venue I would have chosen for Sea Wolf but it was what there was to work with and it ended up well enough anyway. It was then that I noticed that the majority of the crowd had dissipated and mostly only actual fans were left.

Alex talked a little at this point, and told us that Sea Wolf and a couple of other bands had been chosen by Augusten Burroughs to write a song to be included on the audiobook version of his new book, A Wolf at the Table. The song (called "Song for the Magpie") wasn't dissimilar to the rest of the Sea Wolf collection, and contained those gorgeous string elements and Church's signature somber vocal style. It was a bit dirge-y and ran at about the same tempo as "Rose Captain" (You can hear it on Augusten Burroughs website).

At this point the set wound down and we were treated to "Black Leaf Fall", the single "You're a Wolf" (that awesome cello part at the beginning gets me every time), and "Black Dirt." I was pleasantly surprised at how many audience members really threw themselves into the show at this point, dancing like mad and really enjoying themselves.

A short break and Sea Wolf returned to encore with the bonus track, "The Promise." I've only ever heard them do "The Promise" live and it's a great little tune with a really upbeat, swingy tone. A nice way to end the night. I left smiling and even high-fived a drunk frat boy on my way back to the car.