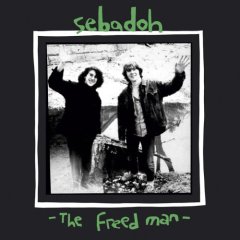 DIY didn't used to be a proud badge worn by bands, it was instead a fact of life for musicians trying to get anyone and everyone to listen to their music. In the late 80s, amid top singles by the Bangles and Bobby Brown, indie rockers would have especially looked to DIY as a way to reach their fan base, a small majority for sure.

Sebadoh's The Freed Man is a sort of love letter to the early days of lo-fi indie rock. An assortment of 52 short songs and avant-garde fuzz from 1984-1990, The Freed Man reveals the true genius that is Lou Barlow and the lesser known Eric Gaffney. Songs are interspersed with samples and sound clips taken from a variety of sources, which later became a staple of 90s indie rock and made for an interesting answering machine message (I tried them all).

The music is not technically superior, but the songwriting is undeniably witty. Smacking of raw talent, the lyrics bite, the percussion stings, and the guitar itches.

Not only is The Freed Man like a time machine, taking the listener back to the beginnings of the indie music movement, but it also stands alone as a brilliant link to the music of Sebadoh. This record has a DIY crunch that is completely satisfying to a palate that feels somehow starved by slick production values. A particular favorite is "Soulmate." When Barlow sings "I will probably have to sleep with a lot of girls/Before my soulmate reveals herself to me," it's a moan of innocence that not only speaks to the teenager in all of us, but it also a prophecy of both the career of Barlow and the future of DIY music.