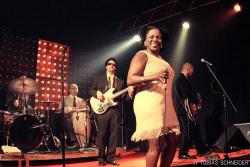 A transcendent night with Sharon Jones & the Dap-Kings

One of the things that I’m thankful for in my rock and/or roll life is that I had the pleasure of seeing James Brown live before he died. Sure, he was over 70 at the time (it was probably the last show he played in Seattle) but unlike his peers that I’d also seen live (Chuck Berry and Little Richard specifically), Brown could still bring it. He couldn’t hit all of the high notes or do the splits like he could do years ago, but he was nothing short of electric and his show was certainly one of the memories that I will never forget. While the Brown show I saw was magical, I have no doubt that the ones he put on in the 1960s and 70s were transcedental.

This live show review, of course, is not about James Brown. He’s been dead for almost a year — but is surely fronting the greatest band in rock and roll heaven as I type this (and I say that as an unrepentant athiest). No, Saturday night I was one of the very lucky people in Neumo’s who was there to witness (“watch” or “see” or “catch” are far too weak of verbs to be using) the phenomenal, and likewise transcendental, Sharon Jones and the Dap-Kings.

I probably go to more live shows than any other writer on the TIG staff and I can say entirely free of hyperbole or hype that the sold-out show at Neumo’s last Saturday night was as close to a religious experience this non-believer could experience. It was easily the best show I was at this year and one of the best I’ve seen yet.

All that you really need to know about Jones and the Dap-Kings is such: she has been singing her whole life but worked as a correctional officer to pay the bills until getting the chance to sing for the Dap-Kings in 1996, when she was 40 years old. She was often rejected for being too fat or too old by people that obviously never listened to Aretha Franklin. The Dap-Kings are a remarkable soul/funk band in the tradition of Brown’s Famous Flames. Together, they released their first album in 2002 (Dap Dippin’ with Sharon Jones and the Dap-Kings). This year, they released their third album, 100 Days 100 Nights {review}. Members of the Dap-Kings (including Jones, although she was never credited) were also brought in by it-producer of the moment Mark Ronson to play the music on Amy Winehouse’s Back to Black album.

I left 100 Days 100 Nights off my top ten list for 2007 (even though it was one of my favorite records of the year) because I never felt there was a moment where Jones’ voice and presence took over the album. Live, there were no such doubts. From the moment the 51-year old Jones took the stage, about 15 minutes after the Dap-Kings did (James Brown did the same thing when I saw him), she had complete control over everyone at Neumo’s. While she was a commanding presence, she’s also a populist. At least a half-dozen times during the set (which lasted for 100 glorious minutes) she brought people from the crowd to dance or sing along with her. Two of which (at separate times) were Paul Chandler, frontman of the instrumental but funky openers Megatron and his girlfriend. Chandler had just turned 21 and Jones sang the sultriest version of happy birthday to him. (Confidential to SJ: my birthday is coming up in about six weeks.)

There were numerous highlights for the evening. A cover of “This Land is Your Land” that included another verse that mentioned, amongst other places, a welfare office, and the title track off of 100 Days 100 Nights – which brought down the house.

Loss and rejection are themes that run through Jones’ music and career path but on this given Saturday night Neumo’s was packed with people who worship her. She did not disappoint. For whatever reason, the people who attended this show witnessed something remarkable. Something surreal. Maybe even something beyond them. I don’t believe in a higher being but I now understand the feeling of someone who has been touched by one.