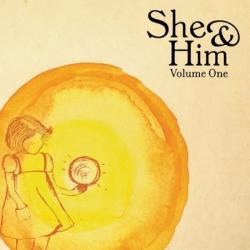 I’ve been dropping hints on TIG for months now about how badly I wanted to hear She & Him’s new record, She & Him Volume One, and it looks like it’s finally paid off. Sure, the album came out some two months ago and just arrived in the TIG review bin a couple weeks ago. But better late than never is the expression, right?

She & Him is the swoon-worthy project of Portlandite M. Ward and actress-cum-chanteuse Zooey Deschanel. The analog-riddled album is peppered with '60s-era ditties, chock-full of an old-timey feel yet sounding wonderfully of-the-moment.

The record pays homage to the vocally charged songs of old, including early-20th century female crooners and 1960s girl-group numbers, with mostly original songs (there are a few covers). Deschanel had squirreled away heaps of penned-and-recorded demos that she finally let loose after a one-off collaboration with Ward in 2006. Deschanel’s voice complements Ward’s guitar and production work the way frilly pink bubblegum ice cream so tastily pairs with a sturdy waffle cone.

For any doubters of doe-eyed Deschanel’s musical ability, I challenge you to give Volume One a listen. Fortunately, this isn’t another case of another young actress who decided to further her “empire” (ahem, Scarlett, Lindsay, Hilary…) by recording an album. This gal can sing, as evidenced in one of my favorite movies, Elf. And I trust that had I not known this was the voice of a familiar face, I’d still be smitten by the songs. There’s a ring of a modern day Judy Garland in there.

A string of three really strong tracks mark the middle half of the record, starting with “This is Not a Test,” which is probably my favorite with its wonderful jangly, Smiths-ish guitar lines and a lovely chorale-filled, sing-along melody. Next up is “Change Is Hard,” which reminds me a bit of Rilo Kiley (igLiz, don’t gag!) — if for nothing else than its melancholic slide-guitar and storytelling charms. And then there’s “I Thought I Saw Your Face Today,” begging to be ballroom-danced to.

I positively love the Hawaiian-island vibe of the pedal-steeled Beatles cover, "I Should Have Known Better," despite its inherent cheese. The concluding “Swing Low, Sweet Chariot” is a strange choice of a cover, possibly just because I can never hear the song without going back to that hilarious scene in Revenge of the Nerds. But this quiet, a capella version is a good closer.

All in all, the record is a fun addition to the 2008 Summer Albums roster — and I can’t wait to hear what the (hopefully) forthcoming Volume Two will hold.