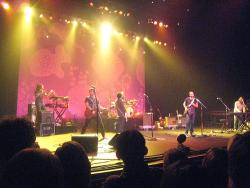 The Shins at the Paramount

It's cool to pan on the Shins right now. They're in the place where The Strokes found themselves a few years ago ("Oh, I had their first record back in the day. It was so great before they become all famous…"), that place where the champions of undiscovered music turn their backs when the artists fly too close to the sun (anyone remember the fascination with Coldplay or Norah Jones in the early days of those artists' careers? I digress.)

The fact is everyone's been anticipating the Shins' release for months, if not years, now, as they rode the heels of small- and big-screen airtime. Wincing The Night Away was part of the Holy Trinity of can't-wait-for albums of 2007, and it quickly made its out-of-the-gate run towards the top of the charts.

I'd bought tickets to the Tuesday Paramount show the day they were released, as did most of Seattle apparently, as the band quickly scheduled a second date to meet the hungry fans' needs. Riding on said impending stardom, I was expecting The Shins to have lost a bit of what made them such a great club band: perhaps their quirky humor edge would be inappropriate for a bigger venue. When I saw them at the Showbox a few years ago, they were off their rockers (in a good way) just clearly having fun (does anyone remember "Street Beats"? Priceless). Tonight's show was a bit more subdued — they moved keyboardist/bassist Marty to the back of the stage, perhaps to subtly dampen his hammy nature.

Overall, the show had the energy of a smaller club show despite being packed to the gills. The Shins were jubilant, carefree, loose — yet musically tight. They made no qualms about restarting a song that didn't get out just right the first time. The crowd was pretty good, too — I expected a bunch of lighters and makeout sessions during "New Slang" — but it wasn't exactly so… though one friend later told me she witnessed a lot of folks on first-dates…

{imaginary aside: True, though 90% of the audience was filled with couples. I felt like the Paramount was Noah's Ark or something. ~igChar}

In any case, you know you're at the right event when you almost get bowled over by last year's Local Frontman of the Year Ben Gibbard, who was milling about the show — perhaps there to pass the proverbial torch to Mr. Mercer?

The band played a lot off Chutes Too Narrow, and the Wincing material meshed well with that older catalog. I recently read "St Simon" compared with "Girl Sailor" as sister songs. They played 'em back to back, and it was totally fitting. The sound is always a bit funky at the Paramount and was too distorted from our spot on the floor in front of the overhanging balcony. But when they moved into quieter numbers, the distortion subsided. The vintage theatre always gets comments from the musical act, and this was no exception; the weighty, moody organ tones of "Red Rabbits" and "Black Wave" married beautifully with the ornate setting and shifting low lights. And the haunting beauty of "A Comet Appears" was incomparable wrapped within the venue's walls. Mercer's voice carried up to the rafters, ringing clear as a bell and bouncing off the walls. Song on song, I kept smiling wider: this was still the same band that dazzled me to pieces a few years ago. They may be launching to stratospheric stardom, but their downright dedication to songwriting, staggering harmony, and unearthly melodies hasn't changed a bit.

After a rather lengthy delay after the main set, the band's encore included a rousing cover and the sing-along sensation "So Says I." For their first encore, they covered "Someone I Care About" by the Modern Lovers. They killed it (proving they're not all melodies and whimsy).

I feel like I'm coming off a Shins high and I can't get enough. I thought Chutes Too Narrow to be their best-ever, can't-top-it moment. If you'd asked me two weeks ago about Wincing, I would have shrugged and said "Yeah, it's ok. Not great, not terrible. A 6 out of 11." But now, I can't stop listening to that stupid record! It'd be at least an 8, approaching a 9 (as I'm listening on repeat for the 13th time in two days). And I don't care what you or your cool friends think. I heart The Shins.