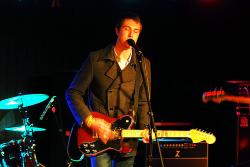 One part Northwest cold, another part summertime warmth, and all soul, Siberian’s live show emanated a strange nostalgia: a tumbling spectrum of emotions encompassing all that it means to win, lose, and sometimes, just have to walk away.

Despite the palpable awkwardness of the audience in El Corazon’s unchartered territory, and an ominous leaky pipe dripping (why I suspect attendees chose to stray far from the forefront of the stage), Siberian proved themselves contenders and moved their way to the top of my favorite current acts.

From the epic "Belgian Beer and Catholic Girls" to the chaotic crescendo of “Islands Forever,” this Seattle band clearly possess the talent and “Please-buy-our-CD” attitude to carry them far in the music world. Hints of rock star greatness are easily heard in their songs, from Muse in “Wolf and Crane” to the traces of Radiohead in “Tightrope.” Fans of Seattle band Slender Means will certainly love this young up-and-coming quintet. Siberian is a marvelous example of a band going to the cutting room table, dissecting their influences, and incorporating a bit of each into their work without overwhelming their own voice.

The delightful melancholy of Finn Parnell’s voice is comparable to that of a kinder and infinitesimally smoother toned Hamilton Leithauser (of the Walkmen). Sounding years older than he looks, Parnell lazily crooned through the set with his subtle vibrato, appropriately punctuating with full-on wails supported by bassist Zach Tillman. The vodka drenched, icy stringed reverb floated affixedly with Parnell’s soaring vocals, creating parts to the brilliant soundtrack that came to be known as “With Me.” Every bit as convincing as the recorded album, Siberian’s live show is not something to be missed amidst the sea of Seattle bands.