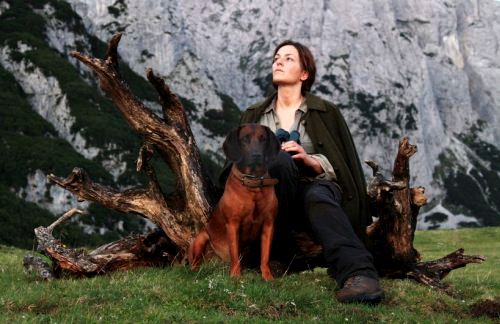 Two speculative-fiction films (one good, one terrible), a buzzy doc about backup singers, and a purgatory-set Amélie are among the highs, lows, and in-betweens of SIFF 2013 week 3 (May 31 – June 6).

The Wall
{screens June 1 at 6:30pm and June 2 at 12:45pm at the Harvard Exit}
I had mixed emotions viewing this odd, slow, science-fictiony film, but it's stayed with me and my appreciation has grown. The premise is clearly metaphorical — a woman visiting a remote Alpine homestead finds herself trapped and alone behind a mysterious invisible wall — and if you're ok with that you're in for a beautifully contemplative experience. The landscape photography is stunning, and the German actress Martina Gedeck amazes in the lead role; her character's narrative voiceover is filled with eloquent ruminations on solitude, connectedness, and the natural world.

{screens June 5 at 4pm at the Uptown and June 6 at 9:45pm at Pacific Place}
A kind of revenge drama from South Korea centering on a very uncomplicated young man who is bullied into participating in a despicable act of violence against a classmate. Attempting to atone ten years later, he forms a relationship with the victim, who is oblivious to his role in the crime. The film is engaging throughout, with the exception of a few clumsily-executed dream sequences, and it doesn't seem micro-budget at all (it was reportedly made for $3000). I just had a really difficult time connecting with this protagonist.

Short Stories
{screens June 5 at 6pm at Kirkland Performance Center}
A writer's rejected story manuscript — short fiction isn't marketable, don'tcha know — finds its way into the hands and imaginations of several contemporary Russians, all of whom cast themselves in the movie versions that play in their heads. Like any shorts program, which is what this essentially is, there are hits and misses: I loved the follow-the-money tale that tracks cash from a petty bribe to the top levels of government, didn't much care for the too-long aftermath of the hetero-erotic traffic encounter yarn. But each piece is presented very stylishly, and most are effortlessly watchable.

Twenty Feet from Stardom
{screens June 1 at 5:30pm and June 2 at 4pm at the Egyptian}
Backup singers get their due in Twenty Feet from Stardom, which could have been the next big thing in mainstream music docs if not for its laggy and repetitive final third. It does a nice job charting the rise of the modern pop vocal sound, from its gospel origins, through the '60s and its shakeups, and into the digital era's declining options for supporting vocalists. And the oral histories are great — wait'll you hear the shit Phil Spector pulled on Darlene Love. The film could be tighter, but it's mostly fun and it ends on an appropriately high note.

{screens June 3 at 8:30pm at the Kirkland Performance Center and June 4 at 3:30pm at Pacific Place}
The SIFF program dares to refer to this film as "Amélie-esque" — yeah, if Amélie took place in purgatory. It's an exceedingly glum romantic drama, or comedy, or something, about a 17-year-old who eats a lot of instant noodles, rides a scooter around a lot of gray urban Taiwanese settings, and languidly attempts to fix the romantic miseries of his family and friends. The characters' actions and conversations range from unpleasantly awkward to straight-up nonsensical. And not in a good way.

Yesterday Never Ends
{North American Premiere, perhaps because every other festival on the continent had sense enough to pass on it. Screens June 1 at 5:30pm and June 2 at 12pm at the Uptown, but I'm hoping you won't be needing that information.}
Here's the brief SIFF description: "In the vein of Alfonso Cuaron's dystopic masterpiece, Children of Men, legendary Spanish auteur Isabel Coixet (Elegy, The Secret Life of Words) visits a near future Barcelona ravished by a devastating financial crisis." OK, that's a real sweet sell on the most boring film I've encountered at SIFF 2013. The entire overlong thing is two people talking — two Spanish actors you might've seen before and enjoyed before, but still — and there'd be nothing wrong with that if only their conversation were in the least bit interesting. But it's not. AT ALL. If you see it, then never mind yesterday — you'll be wondering why this movie never ends.