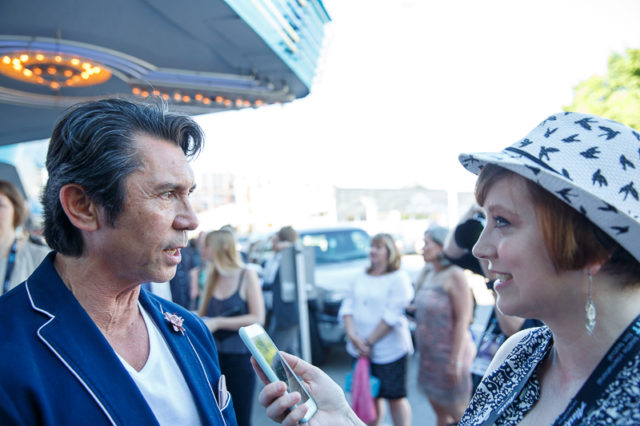 Some kind of magical planetary alignment happened on Saturday night, allowing imaginary rich and I to be on the red carpet in order to capture the SIFF 2016 premiere of The Night Stalker! I got to speak with the most charming person ever: Lou Diamond Phillips {who stars in the film as Richard Ramirez} and also asked a very smiley Megan Griffiths how she felt in the moment:

TIG: I know Megan had a connection to The Night Stalker because she grew up in that area – did you have a personal connection like that as well?

Lou Diamond Phillips: What’s interesting is that I got to Los Angeles in 1986, literally a year after his reign of terror and after he’d been caught, so the specter of Ramirez was still there. That larger than life fear that gripped the community. So obviously I was aware of him! But at the time did I ever think I was gonna play him? No.

TIG: What kind of music did listen to in order to get into that character? I know he was a big fan of metal … did you listen to that too?

LDP: 100%! Every single morning going to set, I listened to AC/DC’s “Night Prowler.” Phillip Carlo’s novel The Night Stalker was incredibly illuminative and gave me so much to work from. And the fact that he [Ramirez] was this metal head; I mean, in many ways he was sort of the Beavis and Butthead of serial killers …

{this is where I disintegrated into laughter}

LDP: Thank goodness he’s not alive to read this, because he’d come after me. But yes, I did my due diligence as a method actor to try and experience what he was experiencing.

TIG: If you had a metal band, what would the name of your metal band be?

TIG: That is PERFECT! So I’m sure that fans come up to you all and request a certain quote from you, or that you do a certain character. Can you tell me what the most requested one is?

LDP: The requested quote is VERY different from people yell at me, almost on a daily basis. Most people scream at me, “Not my Ritchie!”

LDP: Yeah, I know! When they ask for a quote they wanna hear me say things like, “His body’s decomposing in my locker.” {Stand and Deliver} or “Mexican-Indian, you son-of-a-bitch.” {Young Guns!}

TIG: Excellent. Last question, what’s next for you?

LDP: Currently I’m working on Longmire; our next season. I was on set just last night. We will wrap up our 5th season at the end of June, and it’ll stream on Netflix in September. The film that I had last fall, The 33, is out on DVD and On Demand, and then … we’ll see where we go from there!

Bonus question with Director Megan Griffiths! Since I already asked her many things about The Night Stalker, I just had one question left:

TIG: How do you feel about the premiere? Are you super excited?

Megan Griffiths: I’m really excited! I’ve had my brain going too many directions for the last 20 minutes, but once the movie starts, I’ll be able to relax, and it’ll be all good. It’s nice to have everybody together! I couldn’t be happier to have all these guys back.

Guys, just sayin’ – this one might go down in history as my favorite red carpet interview EVER, both because I have a mad crush on Megan and because Lou Diamond Phillips is absolutely the loveliest man alive.

Also, in case you missed the Q&A after Saturday night’s screening of The Night Stalker, Megan and Lou actually sang karaoke to “Blaze of Glory,” and it was the most glorious thing anyone has ever seen. Luckily, there are a few videos of it floating around the internets! Check it out:

{And Megan, YES – you definitely need to make “Q&Aroake” a regular thing}

PSST!!!!  SIFF added a third screening of The Night Stalker this Friday, June 10, 3:30pm at Pacific Place! Or, if you miss that, the film will make its next debut on Lifetime Sunday night.