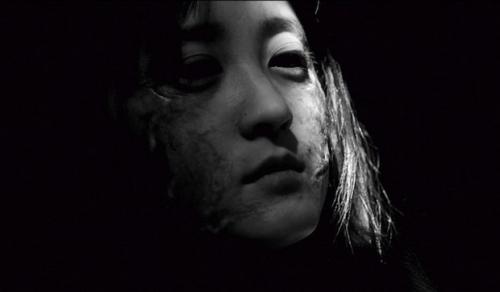 Miss Zombie cannot be the first zombie movie with such an intense art house esthetic, but it’s the first I’ve seen. More importantly this quiet but disturbing Japanese family horror film brings a level of sympathy unusual to the genre, creating one of the few zombies where you care about their backstory and what happens to them. And no, Warm Bodies does not count.

The story starts with the delivery of a female zombie to a doctor’s country home. Sent by a friend trying to create a new business around “low grade” zombies, the box comes with two instructions: 1) Don’t feed her meat, and 2) Use the included pistol if things get out of hand. Zombiness in this universe is a viral conditionof sorts. Lower grade carriers tend to be docile and not considered a large danger … of course, things can change pretty fast under the right circumstances.

The zombie is soon put to work scrubbing an outside floor and is allowed to come and go on her own (living in the family’s more urban storage shed), and the couple’s way-too-adorable young son enjoys photographing her (along with everything else around). While she deals with fragmentary memories of her own life cut short, workmen and others males around Miss Zombie admire her posterior … and perceived complacency to overt aggression. That sets up a vibe where the zombie is in a sympathetic space and the humans around her all seem too eager to exploit her, including the wife of the family in a moment of desperation.

But this is a zombie film after all … not just just a picture reveling in overt subtext of a patriarchal culture of abuse of women. So eventually things start to become *ahem* complicated… which is when all the time-building tends to pay off rather well.

There are some areas where suspense of disbelief is key: when the zombie is first delivered town leaders express strong concerns about the potential killer in their midst, but soon seem completely unconcerned that she’s walking across town without supervision. Then there’s the fact that she seems less than effective at her assigned job. And last, but certainly not least, among literally thousands of potentially bad ideas, having sex with the zombie has got to be at least be in the top ten. But you’ll be surprised at how little thought seems to go into the obvious potential complications of that. Even beyond the “hey, isn’t that rape?” issue. Though I suppose that last part/issue is very much the point of the story being told within the genre convention.

All said, there’s a lot to recommend in Miss Zombie. It looks terrific, being mostly shot in Gothic black and white. Then there are the simple but effective performances built upon by the visual editing. Finally, there’s the true emotion that builds to the film’s compelling climax. It’s not like all those other zombies – meaning while it’s unclear how many more unique zombie stories exist to be told – Miss Zombie remains on the right side of that equation.

{Miss Zombie screens at SIFF on 5/16 at the SIFF Cinema Uptown, 5/24 at the Renton IKEA Performing Arts Center, and again 5/25 at AMC Pacific Place}