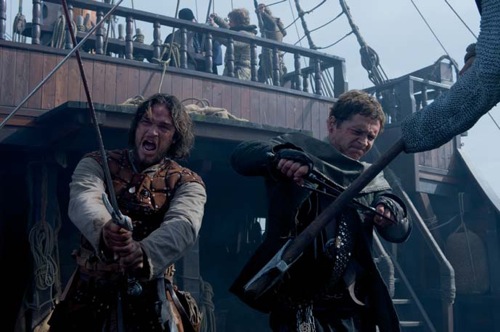 SIFF Take: 12 Paces Without a Head

Sexy German pirates in period costume? A soundtrack that includes The Clash, T-Rex, Johnny Cash, and The Thermals? Oh hellyes.

Rockin’ music aside, this (somewhat true) tale of two 14th century pirates is well worth the price of your SIFF admission. It’s got a little bit of everything: humor, action, and of course, romance…with the title coming from a legend about a certain pirate walking 12 Paces Without a Head.

After many years of sailing the Baltic Seas, Klaus Störtebeker suffers a near-mortal wound and after being treated by a buxom, beautiful tavern maid feels an urge to give up the pirate life and settle down, while partner Gödeke Michels is anxious to return to the sea and raise some more hell. But when the two  accidentally discover a new-fangled weapon that blows large holes in ships, Klaus’ interest is renewed…for awhile, at least.

Right as Gödeke realizes his best bud might be ditching him for good all because of a chick (which causes his already unstable temper to skyrocket), the authorities make it their mission to capture the duo and end their life of fun-filled crime. A nicely done, action-packed film that’s just the right length, and just right for those seeking something fun.