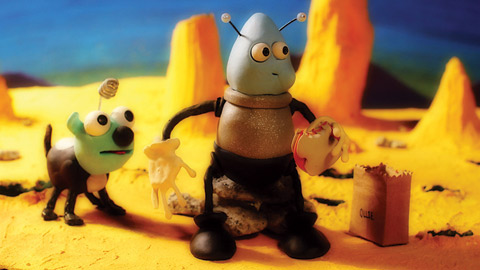 The Family Picture Show played to a packed house of smallfry and bigfry last Sunday afternoon, with 12 family-friendly shorts both animated and live-action. Here’s my stack-rank, but feel free to quibble freely! I found links to at least a few of ’em so you can play along at home.

Zebu and the Photo Fish

This live-action short from Uganda is suspenseful, sweet, educational, and very satisfying. Zebu, the son of a fisherman, inserts himself as middleman between his father and his father’s creditor, single-handedly moving the family from a barter economy to capitalism with the help of basic arithmetic and a great deal of moxie.

A short biopic about a kid who really, really, really loves vacuum cleaners. Especially in the Age of YouTube, a movie about a preteen genuinely fixated on vacuums (and also a fan of musicals) could far too easily turn into a point-and-laugh-fest, but Kyle himself refuses to be an object of ridicule and instead leaves you wishing you were more like him.

Another gem from PES with ordinary objects masquerading as other ordinary objects, this time in the service of making guacamole. This one’s possibly even better than Western Spaghetti, which blew my mind at the Family Picture Show 2 years ago. If you’re looking for a rabbit hole, treat yourself to more at the website.

Lest we all feel too highbrow at a kid’s event, let Brad & Gary show you how great humor is really done. Two creatures get their fingers sequentially stuck in various orifices. High-larious.

This one got the gold star from both of my kids. It’s a charming, old-school Claymation (with clay!) story about a Martian trying so very hard to eat his picnic lunch before it’s pilfered by a subterranean (submartian?) be-tentacled thief. You can see the whole thing here.

Endearingly meta, this one shows what animation gets up to when the animator wanders away. Watch for the page numbers flying by in the upper left. I’m surprised more animators don’t do this sort of thing, actually.

A couple of mischievous shoelaces tease a stoic mountain man who lives at the tippy tippy top of an impossibly tall peak with his wise and literate crow. Just like your Wednesday, I’m sure. I couldn’t find the whole thing, but here’s the trailer.

This visually sumptuous fantastic journey follows a young girl into the surprising universe behind the walls of the Metro when a fox steals her ticket. The plot is far less important than the loveliness.

An Indian boy has a series of adventures trying to protect his marbles from thieves, and then stumbles on an act of generosity that makes him a friend. The cinematography is especially beautiful.

A very sweet but slightly disjointed story of a girl’s surprising source of protection. (Honestly, I can’t really improve on the official blurb: “A young girl discovers that her backpack has her back.”)

This Ren and Stimpy knockoff was insane and fun and irreverent and extremely silly, but also rather exhausting. Just like Ren and Stimpy!

Kudos to the UW students who put this together—it obviously represents a lot of work and time. But it’s longer on achievement than excitement.