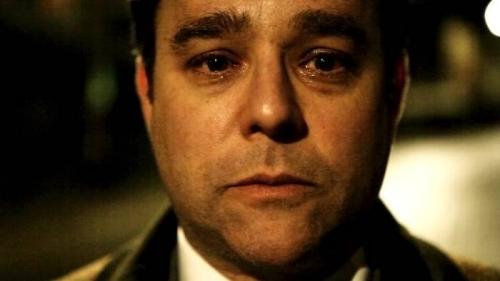 When this movie started playing, I was like “Hey! That’s Neve Campbell with a British accent! Weird.” And then I totally forgot about that, because The Glass Man starts out as a depressingly awkward thriller that nosedives into Crazytown.

Martin Pyrite (Andy Nyman) is REALLY into appearances, which means he can’t tell his beautiful wife (Neve) that he lost his job weeks ago, and he owes shit-tons of money to everybody. Nope. Martin prefers to just get dressed in the morning and drive to work anyway, because he promised to protect and take care of his wife when he married her, and bygod that means he can’t tell her the truth about them possibly losing their fancy house or having access to expensive jewelry and designer duds. So when a grizzled stranger shows up on his doorstep and offers him a way out, he takes it—even if it means driving the dude around on mysterious errands in the middle of the night.

The Glass Man is kind of a mess, but what sells it is Nyman’s panicked and sincere portrayal of Martin. You FEEL for this guy; you really do. As for the Crazytown part, I don’t want to give anything away, but I’m still processing how it happened and why. One further note: if I had to stick a genre on this movie it’d be “depressing thriller”, because it punches you in the gut at the end. Nicely done, but likely not for everybody.