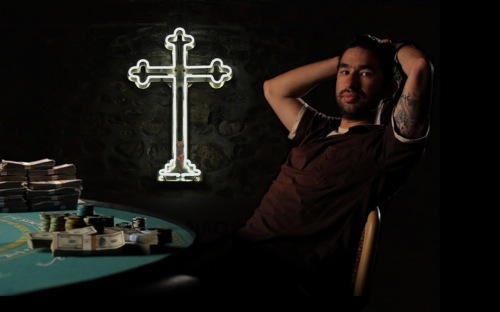 Thus far, I’d been blissfully unaware of this young, hipster group of Christians who do things like start their own churches so their band can play hymns, drink frothy microbrews and whiskey, and bankroll their lives by hooking up with two other hip young Christian dudes who started a card counting business. But – no more. After watching Holy Rollers, I sadly (SADLY) know way too much about these guys.

That photo above is of Ben, the co-founder of “Chuchteam” (the nickname given to their blackjack business since almost all the players are Christians), and I feel like it pretty accurately portrays what you’re in for when you sit down to watch this film. But that’s okay – you don’t have to like these guys (in fact, if you’re similar to me and Embracey, you’ll loathe them), because watching them do what they do is still pretty damn fascinating.

You might think going into it – like I did – that the Churchteam was put together to you know, fund churches, and give back to the community via charity, and the like – but nope. Outside of a few pastors who seem to be using at least some of the money (and time, since team members worked an average of 40 hours…a month) to get closer to the holy spirit, MOST of the team members are essentially using it as a way to work minimal hours for maximum pay. It’s actually kind of funny to watch them delude themselves.

“I HATE Casinos!” they say. “I HATE VEGAS!” they say….and then proceed to chant the mantra that it’s totally okay that they have to go to those places, because they’re taking money from the evil people and using it for good things! Good things being….nice hotel rooms, limos, town cars, and drinks – right guys? Hey, I’m just sayin’.

In any case, I do recommend you see it, because it’s kind of amazing to watch. Once the profits start to take a dive and the team resorts to all kinds of disguises to avoid being kicked out of casinos, the entertainment level cranks up. And it’s more than worth the ticket price just to see Tennis Pro’s David Drury (who has a very small part in the film) in his hilarious Republican costume.