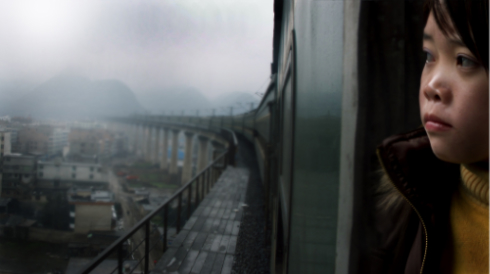 Every Spring in China more than 130 million workers jam train stations in desperate attempts to travel home for the New Year holiday — a mass exodus from industrial cities that constitutes the world’s largest human migration. For many travelers the journeys are extremely difficult ones (grueling distances, crammed-beyond-capacity trains) but represent their one opportunity to reunite with family all year.

In the beautifully stark, jaw-droppingly honest, and very moving documentary Last Train Home, director Lixin Fan focuses on one couple, Changhua and Sugin Zhang, beginning as they embark upon a two-day journey to their poverty-stricken rural birthplace to see their children. And it’s not a happy holiday for everyone: The Zhangs’ dearest wish is to earn enough money to provide their kids a good education, but teenage daughter Qin, resentful of their extended absences (and, in her mind, abandonment), eventually decides to drop out of school to work in a factory herself — a crushing blow to her parents which leads to a deeply painful confrontation with her dad.

The extraordinarily intimate collaboration with the Zhangs reminded me a lot of the Yung Chang-directed, Lixin Fan-produced Up the Yangtze, which exquisitely observed one of many families displaced by the mammoth Three Gorges Dam project. Last Train Home similarly places a human face on China’s rise as a world economic power, illustrating the true cost of progress in a country stuck between its industrial future and rural past.