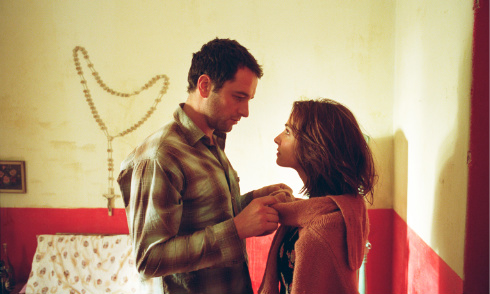 If the Hallmark Channel ever goes multilingual they should secure the rights to this sweet, slow, unassuming (and rarely surprising) indie. It begins with a quick social studies lesson about Chubut Province, which is situated in the Argentina portion of the Patagonia mountain range and is where a community of descendants of late-19th-century Welsh immigrants can be found. Patagonia the film contains two analogous stories, each set in a different nation.

The first is about a Welsh couple named Gwen and Rhys; he’s been sent to Patagonia for a photo project, she’s discovered she’s infertile just ahead of their trip. He’s a bit of a tightass, she prefers to party, and the situation leads to (spoiler alert) her having a lil’ fling with their guide (Brothers & Sisters‘s Matthew Rhys, who by the way is super hot in this).

The second narrative takes place in and around Cardiff, Wales, were an elderly Argentinian is taking a secret pilgrimage to find the childhood home of her mom; accompanying her is a dorky-cute neighbor kid named Alejandro (Nahuel Pérez Biscayart, who you may have seen in the fine film The Aura); he (spoiler alert) ends up hooking up with an underdeveloped character played by pop singer Duffy.

So it’s all about quests for meaning, investigations into cultural identity and searches for truth, see? And while both stories go pretty much exactly the way you expect, director Marc Evans (Snow Cake) makes sure to get in as many breathtaking shots of both countries’ panoramic landscapes as possible. It’s undeniably a lovely movie to behold.

But, yeah, very Hallmark. Which is not necessarily a criticism! If your mom is in town and into this sort of thing maybe you can take her on a SIFF date.