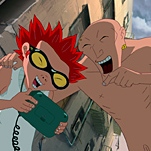 A sweet indie musical, a quirky Kiwi buzzmaker, and a fierce urban mindtrip are among the must-sees on tap for 5/25-31.

Aachi & Ssipak (5/26 11:59p Neptune)
Rude, wicked, certifiably insane South Korean animated film about a corrupt (but candy-colored) future society that uses highly-addictive Juicypop treats to "reward" its citizens for producing the last remaining energy source: human poo. A black market (brown market?) has developed for the treats, and when street hoodlums Aachi and Ssipak encounter a cyborg cop out to stop a relentless gang of Smurf-like mutants, and a wannabe actress with a special ability (let's just say she's a top pop earner), high-octane calamities ensue. Far from high art, but very entertaining in its relentlessly crude way, and the ill-behaved 14-year-old in me loved it.

A Battle of Wits (5/26 6p Neptune; 5/28 3:30p Neptune)
The English title is better suited to a quirky Wordplay-esque indie documentary, but this is actually a stylish and elegant Hong Kong action epic that's a thrill of a different kind. Set during China's Warring States period, the story involves a series of attacks by the intimidating Zhao Nation against the humble (and poorly-governed) state of Liang. With the help of an unconventional military strategist (beautiful Andy Lau), the people of Liang set out to defend their turf… and hopefully prove that might is no match for reason. Electrifying action sequences and performances highlight this gorgeously-produced historical tale; visual wonders of the concluding battle are alone worth the time and ticket.

Crazy Love (5/30 9:30p Pacific Place)
Truth can be stranger, and stupider, than fiction. Cases in point: the two subjects of this documentary about an obsession-triggered maiming case (ambulance-chasin' lawyer hires thugs to throw acid into ex-girlfriend's face post-breakup) that held New York in thrall in the late '50s, mid-'70s, and mid-'90s. I had trouble caring about the characters for the first half-hour, and wished for a bit more narrative thrust to add much-needed momentum during the occasionally draggy proceedings, but the eccentric talking heads and the bizarro situation they created for themselves (not to mention a resulting series of media maelstroms) get fun. And crazy for real.

Eagle vs. Shark (5/31 7p Neptune)
This irresistibly charming New Zealand quirkfest, a chronicle of the courtship of a socially-challenged fast food clerk and a grandeur-delusional computer store geek, could very well become the buzz flick of SIFF '07. Delightful story, full of quote-worthy awkward exchanges, peppered with fun stop-motion animation sequences and a shimmering soundtrack by The Phoenix Foundation. Inevitable comparisons to Napoleon Dynamite, Me and You and Everyone We Know and the films of Wes Anderson will be well-earned by gifted first-time feature director Taika Waitiki.

Knocked Up (5/26 7p Egyptian)
If you can't wait for the early-June theatrical release of Judd Apatow's latest comedic gem, check out SIFF's sure-to-sell-out advance screening. You've seen the trailers — Seth Rogen becomes Katherine Heigl's unlikely babydaddy — but that doesn't get at much of the 132-minute story; watching it feels like sitting through a short season of ingenious TV. That said, Knocked Up is no 40-Year-Old Virgin, and definitely no Freaks and Geeks, but it's still funny shit à la Apatow.

Life In Loops (5/25 9:15p NWFF; 5/26 9p NWFF)
Surprising urban mindtrip that held me in its dizzy spell from the opening sequence to the closing credits. Footage from the 1997 doc Megacities is remixed, Nortec Collective style, with a new techno soundtrack by the Sofa Surfers, forming a fascinating look at the rhythms of city life in NYC, Moscow, Mexico City, Tokyo and Bombay.

Once (5/27 6:30p SIFF Cinema)
A theatrical release is imminent, so don't worry if you don't make it into SIFF's lone screening of this enchanting indie film about a Dublin busker (Frames frontman Glen Hansard) and a Czech immigrant (Markéta Irglová) writing and recording music that may tell their love story. Hansard's songs are swoony and sweeping, and the leads' performances are almost documentary-like in their gritty simplicity. A brilliantly organic musical with nary a trace of Singin' in the Rain saccharine.

A Walk Into the Sea: Danny Williams and the Warhol Factory
(5/26 6:30p NWFF; 5/27 9:15p NWFF)
The subject of this intimate, dream-paced documentary is filmmaker Esther Robinson's late uncle, Danny Williams — former lover and protege of Andy Warhol, Factory filmmaker, and creator of the Velvet Underground's groundbreaking light show — whose 1966 disappearance remains unsolved. If the mystery doesn't grab you, the interviews with Factory regulars (John Cale, Paul Morrissey, and Brigid Berlin among them) will.

Golden Door
If you're a Charlotte Gainsbourg fan you're likely to delight in her lovely performance as the potential passport-wife of an early-1900s Sicilian man immigrating to the New World with his extended family. Otherwise, this is a long, occasionally engrossing story laced with pretty fantasy sequences that are never quite as effective as they hope to be.

King of Kong
This middling doc chronicles the unlikely rivalry of a bland Redmond schoolteacher determined to beat the world Donkey Kong record and a petty cockhole of a Florida condiment mogul whose high score has stood since 1982. Your level of fondness for classic arcade games (and for GLoW and album rock and artificially big hooters) may determine your degree of appreciation.

Paprika
Dream-lives merge with reality, and with each other, after an experiment in recording subconsciousness goes haywire. A tripped-out, highly visual anime by the director of Perfect Blue, and if you liked that film you'll probably dig this one too.

Rescue Dawn
I wish I could give Werner Herzog's latest, inspired by actual Vietnam War events around the escape attempts of a cocky American pilot (Christian Bale) and his fellow POW-camp prisoners, more props. (If you've seen Herzog's 1997 documentary Little Dieter Needs to Fly, this updated dramatization of the story will serve as a good narrative companion.) Jeremy Davies and Steve Zahn's emaciated/crazy characters are almost worth a full recommendation, but the film as a whole is executed with a bland stupor that I just didn't find enjoyable.

Death at a Funeral
How could a proper British funeral gone horribly awry be this unenjoyable, especially with Peter Dinklage playing the opportunist down-low gay lover of the recently deceased? Director Frank Oz (yes, the voice of Yoda and Miss Piggy) is obviously going for Fawlty Towers by way of Gosford Park here, but the film is just an offen
sively ludicrous piece of trash.

Severance
Director Nick Schager has called it a hybrid of The Office and Deliverance, a scenario that could have been twice as fun as this horrible exercise in tedium. It doesn't pay to overlook the stupid premise (Brit arms-firm coworkers go on a team-building exercise at a remote Hungarian lodge conveniently out of cellular range; locals with a grudge pick 'em off one by one) because the brain-dead story just doesn't earn its jump-atcha jolts — and there are precious few of even those.

The Singer
This maudlin French film about an aging dance-hall chanteur (dangerously rotund Gérard Depardieu) and his attempts at romance with a flaky single mom (sapphic sprite Cécile de France) might have been more palatable with a half-hour shorn from its drag-ass 112-minute runtime.