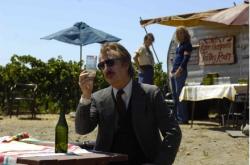 When Bottle Shock, the closing night film at the 2008 Seattle International Film Festival, was screened for critics, it was obvious that I had seen this film before. So have you.

Filmmaker Randall Miller uses nearly every cliché in film imaginable: a family business with a proud but stubborn father, a slacker son who still has the family’s best interests at heart, a woman who shows up at the beginning to only be one of the protagonist’s love interest and throw in some dime-store philosophy about hard work and put it in a bottle of chardonnay and the result is Bottle Shock.

The film tells the story of the famous 1976 “Judgment of Paris” wine-tasting event where an American wine from California’s Napa Valley “beat” the French wine establishment. I’m sure that the film is highly fictional – everything wraps up way too neatly to be anything other than a Hollywood production. There isn’t a single surprise during the film’s 110 minutes.

Now that we got that out of the way, I actually rather enjoyed the movie. Although the characters are generic boilerplate, they also have a passion, but not pretension, for good wine. It’s something that each and every important character cares about that you want to care about it too. Like with all of Robert Altman’s films, there is a common thread that holds each character together, and here’s it’s their love of wine. Bottle Shock isn’t as ambitious and, unlike Altman, Miller is too afraid to fail that he relies on the aforementioned cliché and doesn’t take any risks.

The long, pan shots of the vineyards are gorgeous even if the remainder of the cinematography is pedestrian. The acting, especially from Alan Rickman, Dennis Farina and Chris Pine, are especially good. Rickman’s character has the most depth, as he’s a British merchant snubbed by the French wine hegemony who still seeks their approval. After travelling to California on a tip to sample American wines, his Steven Spurrier puts on the famous blind taste test and the surprise winner was the 1973 Chateau Montelena chardonnay.

I’ve been reading a book off and on recently about the powerful, American wine critic Robert Parker and whether some wineries sink or swim really can rely on his recommendations. I have no doubt that the drama attached to the 1976 event and how it “saved” American wine is not exaggerated, even if the many details of getting there may have been.

This film is a love letter to wine, and American wine at that. The characters that are ambivalent or dismissive of wine are only present in one scene. It hits the right notes to make us cheer for the American heroes, just like another film Bill Pullman starred in, Independence Day, although Bottle Shock is far less manipulative and much more enjoyable (and certainly not a right-wing wet dream). Still, the antagonists are the mostly-faceless French (we are still living in George Bush’s America whether we like it or not).

Bottle Shock is an enjoyable film to watch. It’s a film you’ll want to discuss afterwards, but not to debate the merits of it, but as an excuse to drink some really good wine.