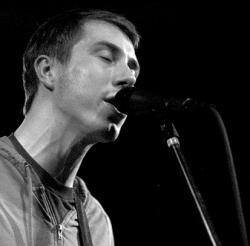 A preview of what the evening would hold started with Kay Kay and His Weathered Underground, the band that played before Siberian. Eleven people with hearts on their sleeves and grins on their faces — along with terribly intriguing electric violins — played rock opera woven with threads of Harvey Danger's legacy, prompting Siberian's Colin Wolberg to keep mentioning how amazed he was at their awesomeness.

Kay Kay will be playing at Neumo's in December, it'll be interesting to see what they can do with more than three mikes and a better balance between their fifty billion instruments and the vocals.

Siberian, the headliner, has been on my playlist ever since they released their EP Hey Celestial near the beginning of the year. Yet between the EP and their full album debut this last Friday, I'd managed to forget exactly why Siberian had made such a strong first impression on me; I just remembered that I liked what I'd heard of them. After wracking my brains through their first three songs and trying to figure out who lead singer Finn Parnell sounded like, because I could swear I'd heard him a lot before, the opening strains to "Paper Birds" came on along with the light bulb over my head. Oh, he sounds like himself. Because I'd played that song on repeat for a good solid week after it was released.

The band's crispy clean duet-harmonies combined with simple yet piercing lyrics, "I'm not okay, we're just kids man, but we'll be someone someday…" to silence the ever-present babble of the audience at the Croc. Siberian's casually cheerful stage demeanor, as if they were just having a cup of coffee with the audience rather than making their official debut, lent a cozy atmosphere to the venue that nicely complimented their t-shirt & jeans-style of indie rock. The whole show went smoothly, with awkward stage banter coming off cute and a seamless set filled with solid instrumentation and the occasional pair of tambourines (the theme instrument of the evening). It was a bit too smooth as one song blended into another, often times without much of a change between the previous sound and the next, but overall the show was everything an album debut should be as a showcase for Siberian's rising star in Seattle's indie music scene.

It shouldn't be possible for a band to release such a beautifully polished album as With Me for their debut, and alongside that take to the stage with such a subtle confidence. Yet Siberian managed all that and left the night with a burst of energy on their last number that had been missing in the earlier portion of their set: the bassist, drummer, keyboardist, lead vocalist, and guitarist all immersed themselves in their sound and danced or played like no one was watching. Arms flew from the bottom of the guitar to the top of the shoulder as power chords struck notes that reflected off the eyes of the audience, leaving a tired but happy impression as the clock struck one a.m. and the band motioned a pleased crowd towards their latest recorded endeavor.