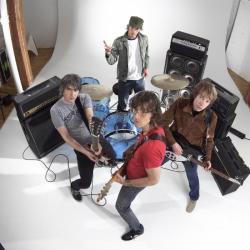 When I entered Chop Suey on Sunday night for the Sloan show, the first thing I noticed was that there were a lot of people I recognized who are in bands in the crowd. This isn’t to name-drop but to point out that there were a lot of musicians here to see Sloan. When you see a lot of musicians in a crowd, it usually signifies that a band is very, very good at what they do – usually possessing some significant prowess with instruments. With Sloan, they have a reputation for crafting excellent powerpop songs.

Sloan is, in the very best sense of the term, a professional band. They have been ridiculously prolific for 17 years, releasing nine excellent records. They are unusual in the sense that they have four members and all are credited with songwriting (usually each member writes at least two songs per album).

For this tour, Sloan was ostensibly promoting their latest album, Parallel Play (and they did play man selections from it) but also delved deep into their extensive back catalogue as well. They went at least as far back as their 1994 and 1996 albums, Twice Removed and One Chord to Another, respectively. During this show, their set was performed as though it was a radio broadcast, MRCH radio – a clever plug directing people to the merch table for t-shirts and CDs. After a few songs, the band members may switch instruments and you’d hear a radio voice with a humorous “commercial”, lasting a few moments – even time for an instrument or stage-position change. It helped keep pace with the set and made sure there never was a lull. Otherwise, for 90+ minutes (even before the encore), Sloan played (if my counts are accurate) 22 songs before the encore (and 26 by the end of the night). They began at 10:45 and finished around 12:30.

Sloan has a very classic rock sound – I heard element of Bo Diddley, Chuck Berry, The Rolling Stones and Cheap Trick in their sound. They are a guitar-driven rock band with some of the catchiest harmonies and well-written lyrics. My favorite song in their catalogue (which was arguably the closest thing to a US hit they had), “Who Taught You How to Live Like That?” (from 2006’s “Never Hear the End of It”) sounded like an anthem, with most people in the crowd singing along.

Mid-way through the show, one Sloan member asked rhetorically if Kim Warnick (from The Fastbacks and Visqueen fame) was really in the crowd (she was) and said that she was responsible for “putting Seattle on the map.” Very shortly thereafter, she was up front and close to the stage rocking out for the remainder of the show.

Sloan has always reminded me a lot of fantastic band that hasn’t quite gotten its due in the US: You Am I. Sloan is Canadian and You Am I is Australian and You Am I’s songs are primarily written by frontman Tim Rogers (where as Sloan’s members all write songs) but they both have achieved impressive success in their home countries and have large, cult followings in America but their chart success has been minimal. With Sloan, only their 2006 album Never Hear the End of It found its way onto a Billboard chart.

The crowd really loved every song Sloan played but seemed to respond loudest to the older songs that they said they rarely play, like “Snowsuit Sound” (from Twice Removed) and “The Lines You Amend” (from One Chord to Another). They made a joke in their set how it had been a while since they played a certain song. Since the night before, in Portland – but it had been several years before they played it live prior that. This was a club full of passionate Sloan fans.

This was a wonderful show all around. The band sounded great and rocked a room full of people that would not be anywhere else in the world than at Chop Suey for that show. Sloan truly is one of the best (and most consistent) bands in rock today, both live and on record, but they are also rock’s best kept secret.