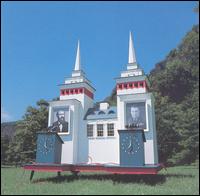 Hey, we all have our down days, even the two Johns in They Might Be Giants. Although you probably think all sorts of cheery thoughts when you think TMBG — "Birdhouse in Your Soul," those adorably weird kids' albums released by Disney, Tiny Toon Adventures' animated video for "Particle Man" — "Snowball in Hell," from the band's 1989 effort, Lincoln (Restless), points the usually quirkily upbeat duo headlong into urban psychoses like depression and anomie.

Don't dig out your wrist-carvers, though, emo kids. "Snowball in Hell" is still a They Might Be Giants song, and, admittedly not too rare in playing around with life's dismal side, dwelling on the miserable aspects of being poor and working a McJob. Maybe back in '89, with only a single other album out before this, TMBG wasn't stretching its struggling-musician imagination when it talked about being flat broke, working in a copy shop and, generally, not having much fun at all. But even at their most miserable, They Might Be Giants whips up a huge pop song, full of sing-along vocals, hooks and those then-quirky guitar and accordion sounds we now take for granted.

But why dwell on the grimmest angle of "Snowball in Hell." When I'm in a good mood (such as right now), I like to think of it as some sort of inspirational number. With the grace of hindsight, where TMBG is loved, revered and, I'm assuming, financially soluble because of its deep, deep catalog and long touring lifespan, "Snowball in Hell" is a phase in the band's development. Sick of slinging copies at your Kinko's night shift? Keep your nose to the grindstone and follow your dream. Maybe in 20 years, you'll have a 15-album back catalog, a devoted following and cartoon renditions of your songs. Or maybe you'll just be stuck in that copy shop, you talentless loser (my good mood seems to have vanished with the end of the song).