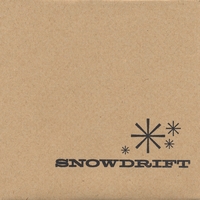 Seattle-based Snowdrift at their best sound like a female-fronted, Kid A-era Radiohead, and at their worst, eerily like a band I used to be in. A decidely slowcore album, the overall tempo of this record gives it a slower-than-the-second-coming, prehistoric glacial feel. But don’t get me wrong, glaciers can be pretty cool. (forgive me).

Snowdrift is a pretty good band. Fronted by Kat Terran’s soft, haunting voice – a mix between Stevie Nicks and Karen O – they are an impressive band that smothers the gaps with foggy electric pianos and a slew of nightmarish, electronic samples. There is a ghastly, Edward Scissorhands-type beauty to this album that when done well, is medicine to the ears after being bombarded with disc after disc of manic indie-pop.

However, the album has a few gullies, most notably the record’s closer "Track 11" which stumbles around in the darkness and gloom and leaks out of the speakers sounding a little like Evanescence – overtly goth and reeking of pretentiousness.

Putting aside those few shortcomings, Snowdrift is definitely worth a listen. This album would be the perfect soundtrack to film noir – an expansive and subtle sound rife with suspense and controlled emotion. The slow pace of this album ends up being a great blessing, one that lets the band move at their own comfort level. This is especially evident on the tracks "September" and "Aviary."

If Snowdrift tried picking up the pace and smattered overdrive onto their guitars, they would end up sounding like they were trying too hard to force something that isn’t there. Snowdrift realizes that you don’t need to run when you look so good walking.