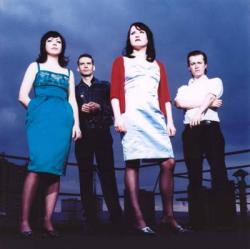 Sons and Daughters at Neumo's

Adele Bethel is a rock star in the best sense of the term.

She, the lead singer of the awesome Scottish rock band Sons and Daughters, has a commanding stage presence, has a voice that can go from being powerful to delicate in the snap of your fingers (or hers), physically she’s quite desirable (that shouldn’t matter but it does) and her band rocks.

Sons and Daughters stopped by Neumo’s Tuesday night for a show that, in a perfect world, should have had a much higher attendance.

With their masterful new album This Gift, Sons and Daughters have quickly become one of my favorite bands these days. Not having read too much on them previously, I thought they were one of the best kept secrets in rock. That turned out to not be true. I went through the archives at TIG and their first two albums (The Repulsion Box and Love the Cup) had gotten scores of 9.5 and 10. Probably the highest average I know of for any band on this website. Even though I’m a fairly conservative scorer, I do think This Gift is even better than the two previous records and would score it accordingly.

When Sons and Daughters played at Neumo’s last Tuesday, it is easy to see why they have become critical favorites (at least here at TIG). Their set was loud, and equally tight and sloppy (which is possible but harder to pull off than it sounds). They blew through songs throughout their catalogue, especially focusing on This Gift. My favorite song of theirs, “Gilt Complex” was the opening track and it only improved from there. Other favorites like “Dance Me In” and “Darling” (which Bethel said was a number one hit back home and a pro-abortion song) were also greeted well by the appreciative crowd (there were still a few hundred people so Neumo’s wasn’t vacant or anything close to it).

One thing I noticed was that guitarist Scott Paterson often complained about how they could not drink on stage. It seems to me that this is, while a long-standing law, only recently enforced. I’m not sure why the city of Seattle, which has gone to great lengths to keep enjoyment and rock separate, finds it necessary to enforce this law when everyone inside is over the legal drinking age. The very next night, I was also at Neumo’s to see buzz band of the moment The Black Kids and its frontman Reggie Youngblood complained of the same thing saying that they couldn’t drink onstage because they were considered to be working.

Regardless, though, when Sons and Daughters were winding down their set, Bethel said that they were going to go offstage for a drink since they couldn’t drink like everyone else in the club before coming back for a few more songs.

When it was all over (and that was probably around 12:15 – after starting at 11:15), the band proved to everyone inside that they could be the best kept secret in rock – a secret we were all too eager to let everyone in on.