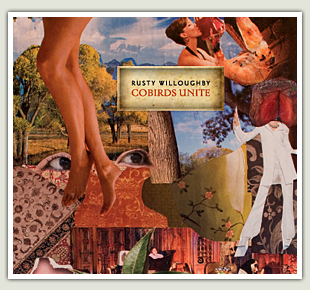 We don’t usually do full on label hype here at Three Imaginary Girls, as we tend to be more artist or song/album focused, but two noteworthy new releases are coming up with stunning shows behind them. And so to massacre a murder of honky-tonking crows with one big blogging, let’s dive into the August (live and recorded) Americana mayhem being offered by artists recently signed to up-and-raging local label Spark & Shine:

Rusty Willoughby offers up a dozen superbly written, subtle-emotive lonely journeys on his new album Cobirds Unite. It is probably the best sounding roots-oriented album I have heard in some time, and that means a lot when you have a voice as sweet and true as Willoughby’s, backing vocals from Rachel Flotard, cello from Barb Antonio, a bunch of great picking and playing on various instruments by (producer) Johnny Sangster, and Tilman Herb on violin, among others. If you listen to this without ever checking out the CV of the man in charge, you won’t necessarily miss anything that’s great about it, as these songs seem as crisp and forlorn as any put to post since the glory days of crossover. But Willoughby has earned his solid reputation regionally ever since he fronted Pure Joy in the mid-80s, and proves on the terse and tender “Crown Of Thorns,” “Where are The Knives,” and the title track on Cobirds Unite that he’s not just hustling faux hillbilly hoodoo.

There have been other projects for Willougby in the meantime (for the grunge years, Flop) but like those of us who jumped with The Dils to Rank & File and never minded hearing a Joe Ely bootleg opening for the Clash, a natural born punk is often just a pony boy exiled in the city. There are a lot of people making less fetching racket sort of like this every night in Ballard, but from these songs you can tell the musical workaholic chose this art-form for the ability to marry mature outlook with considered form. Thus when Rusty Willoughby plays with Black Francis on Saturday, August 21 at the Triple Door, both performers should be getting much hollering back. 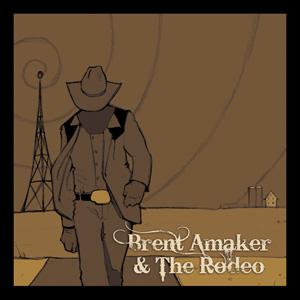 On the other side of the Mississippi, there is Brent Amaker & the Rodeo, who are also adult in content, but in a bad, bad way. That’s “bad” as in “might get mean” and “might pinch your lady friend from you after buying you a beer.” Their full length debut is finally coming up, Please Stand By, and the good folks at Spark & Shine are letting us have a little taste of it right here in the first single “Man In Charge”.

There will be some more info on the album and tour dates announced by Amaker and his boys next week, but in the meantime there have been some new developments due to their guitarist Tiny Dancer getting all busted up on the Fourth of July (at press time no confirmation on the “sexting” details), which makes a hell of a lot of sense. So you should come down for the benefit to help him restore him to fighting form and watch the Young Evils and a whole bunch of other great musicians play on Saturday, August 14 at the mighty Sunset. Save Tiny Dancer!

Kudos to Spark & Shine for putting out these artists, and hope to see you at these awesome shows.