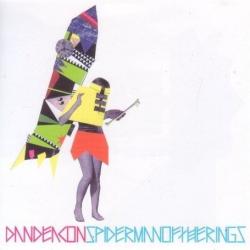 Spiderman of the Rings

I think Dan Deacon is possessed by a cartoon character.

He makes bizarre electronic music with absurd vocals that are typically in reference to the finer things in life, like you know, special cats that just so happen to be made of crystal, emotional bee attacks, snake mistakes, and even the act of your dad fighting your enemies.

Throughout Spiderman of the Rings, Deacon’s voice is typically hidden in a vocoder or shifted in pitch and drenched in enough chorus to make it sound as though he is not a man named Dan Deacon at all, but is actually an entire choir of cartoon characters trapped in the second dimension. The drums are usually loud and simple, leaving the focus on his very unique style of musical tomfoolery. Spiderman’s synth sounds range from soothing to fully abrasive, and are most comfortable when arpeggiated and modulated heavily. Knobs get tweaked. Buttons get pushed. Video games get robbed. The end result is a weirdo landscape opera full of bizarre sounds and ideas. Though oddly enough, all of his shenanigans are pulled off very well. The strange thing about Deacon is not that his music can go from absurdly experimental to baroque in five seconds or less, but that his music is usually fully baroque and absurdly experimental all at once.

Spiderman Of The Rings begins with “Woody Woodpecker,” one of those songs that… well actually, I have never heard another song like this before and neither have you, probably because no has ever thought of an infamous woodpecker’s creepy call as sampleable. “Woody” is one of those songs you hear once and never want to hear again, but then you can’t stop thinking about it. Then you listen to it again. And then you play it for your friends. Then your friends want to hear it again. Then, before you know it, you are in car full of people listening to the song on the way to the beach and no one can decide if it is terrifying or funny. But the most important part about it is that a song with a sample of a woodpecker laughing or pecking or whatever could ever make you think so hard. I guess that may be why “Woody Woodpecker” is the first song on an album full of oddball chamber electro. The whole album is sort of like that now that I think of it.

Throughout its entirety Spiderman is the musical equivalent of taking acid and running around Disneyland as an adult. But this is some pretty serious shit. Imagine if that were your entire life. Terrifying? Joyous? Funny? Laughing? Crying? Convulsing? But not over the course of a few hours, not even over ten minutes; every single moment would be the kind of emotional turmoil that might happen if you were to hear Donald Duck’s unreleased techno albums remixed by Ren and Stimpy while plowing through a recently expanded Wonderland on a jacked up dune buggy.

In a way, Dan Deacon is a musical existentialist to the highest degree; he makes nothingness seem terrifying and gorgeous all at once. But, the difference between Deacon and other absurdists is that songs about the necessity of having nonsense in your life can fringe on being preachy (Talking Heads – “Girlfriend is Better,” Morrissey’s entire career, Raffi, The Junglebook), whereas Spiderman is much better at showing by example. Deacon’s kind of absurdity is the kind that holds residence in Brian Eno’s four rock albums; this stuff is only as challenging as it is rewarding and enjoyable. And it makes you wonder if a world totally gone Nickelodeon would be so bad after all.