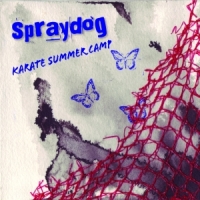 I fell asleep and dreamed of the last fifteen years of indie/alternative music. At least, slipping into Spraydog’s new release Karate Summer Camp kind of feels that way. What is sold as low-fi is more like early 90s alt. A little Mudhoney, a little Teenage Fan Club, the first few songs clearly reveal texture influences. It is also makes complete sense that this is a band that has been together for ten years.

What doesn’t make sense to me is that they are from Newcastle. A city popularly known throughout the UK for bruiser bouncers in black and tough tunnel girls, the sweet popability of Karate Summer Camp are more accord with the lovable Seattle or Lawrence, Kansas sounds. There is little of the classic British dry humor or irony, and more of the classic American rock out to the album.

The single, "Allison Blaire," has a warm fuzzy summer feel to the guitars. The vocals are a little lackluster, but pumping guitar solos will be a treat for lovers of all things prog and shoe-gaze. Drums are standard modern rock, and bass is invisibly strong. None of the trendy violins, fiddles, or accordions to round out the rock make songs palatable for fans of the long gone era of garage.

Songs like "Leave Me Sleeping" where female vocalist Maria Fontana gets the spotlight are where Spraydog shines. Part Karen O part That Dog, she emotes perfectly in contrast with the music. The lyrics are a bit ho-hum, but overall it is easy listening for rockers wanting to relive their glory days.