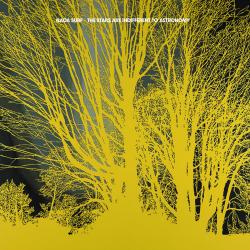 The Stars Are Indifferent to Astronomy

The moment I hear a song written by (Nada Surf vocalist/guitarist) Matthew Caws, it takes on considerable meaning. It can be a snippet of a lyric, a certain chord change, a vocal melody, but there's always something — and as a result, Nada Surf albums are, without exception, difficult for me to process. Which is a little odd, since the songs themselves and the corresponding recordings are generally pretty straightforward. The more I question why, the more I become convinced that it's all about emotion.

After the listen, the hard work begins: either figuring out what it means to me, or being at peace with the uncertainty and absorbing the music from there. Nada Surf inhabit a very short list (REM, Radiohead, Teenage Fanclub, and The Beatles come immediately to mind) of bands I enjoy on an uncommonly personal level — so much so that I'm almost embarrassed by the depth of feeling. Having at least one foot firmly settled in reality, I realize that "Inside of Love" wasn't written about me. But it burrows its way into my heart so completely, there are times when that reality is hard for me to recall. I have little doubt that it's this very intimacy that has garnered Nada Surf a loyal, loving fan base that shows no signs of abating.

The Stars Are Indifferent to Astronomy, the band's 7th LP, is perhaps most akin to 2005's stellar (no pun intended) The Weight Is A Gift. As with that record, most of the songs on Stars inhabit a similar sonic area code, standing in contrast to 2008's more eclectic, though just as rewarding, Lucky LP. The vast majority of Stars' ten tracks are mid- to up-tempo power pop numbers which, in less skilled hands, would surely lack the impact that Caws, bassist Daniel Lorca and drummer Ira Elliot are able to conjure. Such is the advantage on a nearly two decade-long musical partnership.

While Caws seems a bit preoccupied with mortality on Stars, he refreshingly, rather than lamenting-ly, appears to view growing older more as an opportunity than an obstacle. You would be hard-pressed to discover a more life affirming collection of songs, much less one positively exploding with great hooks.

It appears as though the idea with Stars was essentially to avoid over-thinking: seventh track "Looking Through", for example, was recorded the day after it was written. The result is an album that immediately sounds familiar, not because it's a retread but because Nada Surf have so aptly captured the shimmering, lovely essence of what makes them so enchanting in the first place. Opener "Clear Eye Clouded Mind" bursts with punchy, high energy guitars and (of course) flawless harmonies. I suspect it will be a highlight of live shows on their current tour and beyond. "When I Was Young" is no less than an indie-riffic masterpiece, slowly building into a heart-wrenching instant classic.

Though I didn't really need further convincing, Stars reaffirms Caws' place as perhaps the greatest writer of pop tunes in America (all due respect to Adam Schlesinger!). With Nada Surf, what you see hear is what you get. And in this instance, that's a beautiful thing.