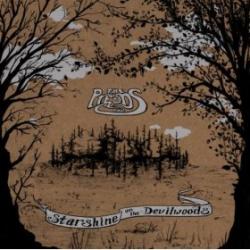 Although The Preons have been a part of the Seattle music scene since the early days of this very website, the band waited until 2008 to release their first full-length album, Starshine on the Devilwoods.

The long waiting period for the release is understandable when you take into consideration some of the challenges the band faced during the recording process: rehab, death, weddings — both attended and canceled — and two band members left the group. Siblings Josh (guitar, vocals) and Janie Cowart (drums), along with trumpet/keyboard player Brad Nelson and bassist John Hendow, managed to persevere and the result is an amalgam of rock, lounge, and jazz reminiscent of the band's self-proclaimed influences the Zombies, the Beatles and David Bowie.

Starshine on the Devilwoods reflect this swirl of interpersonal energy and have packed the songs with rhythm guitars, multiple keyboards, horns, and other occasional instruments making a soft wandering soundscape.

"Starshine" is one of the key tracks with its sharp drumming, 60s psychedelic keyboards and the pretty vocals of former member Maria Leon Guerrero. Other highlights are the cleverly titled "Whole Box of Doorknobs" and "Mistress of the Blue Sky."

The end result is a group of meandering songs perfect to sip your coffee to… which makes sense given there's a rumor that Starbucks coffee shops might be spinning tracks from the album.