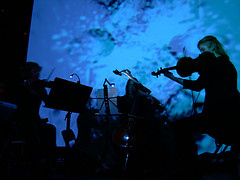 Stars of the Lid at the Triple Door

The big difference between watching a band live and listening to a record is that the latter is usually a singular experience. Even listening to the exact same songs in your headphones is a completely different encounter than it is to hear them in a packed club with a few hundred people. Not to say one is better than the other (and that’s a debate we’ve had here before), but with one you can free yourselves of distractions (as best your psyche will allow) and the other you’re part of a collective where you at least have one thing in common with your friends, neighbors, and strangers in that you all made the same conscious decision of how you’re going to spend your time at that given moment.

For Stars of the Lid, the influential ambient-electronic duo, the equation is quite different. I read that this show at the Triple Door on Friday night was their first appearance in Seattle ever – and they’ve been making music for 15 years now. Wikipedia says the band’s name is explained as “your own personal cinema, located between your eye and eyelid.” Even watching SOTL and the other opening acts, that remained still true. And no so more obvious than with Lusine, the first act of the night. Lusine is one guy, Jeff McIlwaine, and his MacBook. His thirty-minute set was like one long song. He sat at a table and worked the knobs and buttons while a large video projected a blurry (by design) video. My friend looked at the images and absorbed the music to find a common narrative through Lusine’s set. I used the time to be alone with my thoughts. The music was calming and layered. I’m not usually big on meditation but during that set I never thought about the stress levels from work (nor was I thinking of Lily Allen and inevitably writing a letter that begins with “I never thought these letters were true until…”). Throughout the set, the crowd was attentive and quiet. Even at the Triple Door, the most inviting and friendly venue in Seattle – a place that encourages good drinks and conversation, the room was dead silent while Lusine was on stage.

After that set, I saw a guy sitting directly behind me who was actually asleep – and my friend and I were seated in the very front row. I couldn’t help but think that he “got” the music much better than I do (as I’m usually a devotee to pop and all of its derivatives).

My friend who I invited to the show described Stars of the Lid’s latest album And Their Refinement of the Decline as his “insomnia record.” When he told me that, I tried unsuccessfully to think of any other band that would take “I listen to you because it puts me to sleep” as a compliment. But with the lush sounds of SOTL and song titles like “Another Ballad for Heavy Lids” (which they did play), that is one of the obvious effects.

Yet during SOTL’s just-over-an-hour set was far too compelling to focus on anything but the performers on stage. Brian McBride and Adam Wiltzie were on opposite sides of the stage and just outside of the large video screen behind them. In the middle were three women adding violin, viola and cello to SOTL’s live sound. The set was orchestral and epic. They closed the set (before the encore) with “Another Ballad for Heavy Lids”, “Daughters of Quiet Minds” and the truly immense 17-minute “December Hunting for Vegetarian Fuckface” (the title alone is probably why iTunes slapped the whole instrumental record with a Parental Advisory warning). “Vegetarian Fuckface” was, to me, the best song of the set. The orchestration was rich and lush and tension built throughout the song. There was a moment towards the end where violin/viola parts building up made you feel like you inhabited an Alfred Hitchcock film. Plus Adam Wiltzie used feedback as it was its own instrument but made it sound like a thing of beauty, not just noise. It was tempered and precise. Wiltzie told us that they were getting close to the end of the set and one SOTL superfan shouted “but we’re not tired!”

The last show I reviewed was for Justice and I mentioned an essay from the Village Voice that said the author didn’t like Justice because he thought people weren’t dancing to dance music properly. With ambient music, there is no “wrong way” to listen to the music. In one of my favorite reviews at TIG, my pal Imaginary Kiku described the journey she took herself on during an ambient set (in the middle of some indie pop bands at the Vera Project) and that, at least to my understanding, is exactly the point. Every other show I’ve been to seems to overtly provoke some kind of response but at this show it seemed to be about recreating the individual listening experience in a live setting.

I don’t know what it all means, but when I went home I slept better than I had in weeks.